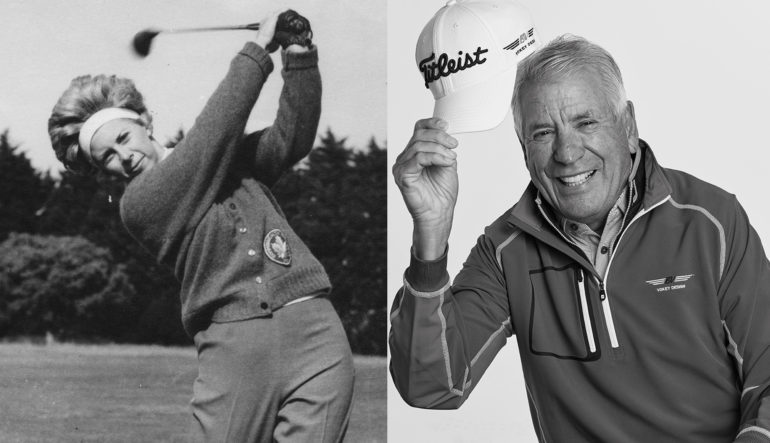 Darling Evans will be inducted under the player category while Vokey will be inducted as a builder. With their inductions, the Quebec duo will become the 78th and 79th honoured members of the Canadian Golf Hall of Fame.

“The Canadian Golf Hall of Fame recognizes the accomplishments of outstanding individuals and their tremendous impact on the game of golf and it is without question an honour welcome Judy Darling Evans and Bob Vokey as our newest honoured members,” said Sandra Post, Chair of the Hall of Fame’s Selection Committee. “During her competitive career, Judy was fierce and accomplished competitor while the Vokey name has become synonymous with excellence in craftsmanship. Their respective elections exemplify the diversity of talent represented among the members of the Canadian Golf Hall Fame.”

During her stellar amateur career, Darling Evans, 79 was a dominant force in Quebec and Canadian women’s amateur golf with a resume that includes three Quebec Junior Girls’ titles (1953, 1956 & 1957); six Quebec Women’s Amateur titles (1957-1961, 1972); and a Quebec Women’s Senior title (1988); three Quebec interprovincial team titles; a Canadian Junior Girls title (1957) and a pair of Canadian Women’s Amateur victories (1960-61). She also represented Canada at the 1959 and 1963 Commonwealth Games and in 1998, her accomplishments were recognized with induction into the Quebec Golf Hall of Fame.

“Just last weekend I was at the Honda Classic at PGA National where I live, and I was cheering on Graham DeLaet who was well under par, when my phone kept buzzing and I ran home to find Sandra Post had called,” said Darling Evans about getting the call from the Selection Committee.  “She told me that I had been selected to be inducted into the Canadian Golf Hall of Fame. I was overwhelmed and shed more than a few tears. It was the most wonderful surprise. I would like to thank Sandra and the Selection Committee for bestowing this honour on me. It is truly a great privilege to be in the company of such distinguished and accomplished honored members and I am very excited about the upcoming ceremony this summer at Glen Abbey.”

Born in Montreal and raised in Verdun, Que., Vokey has become one of the world’s foremost wedge designers and trusted short game advisor to many of the modern game’s greatest golfers. His innovative designs have made Titleist Vokey wedges a trusted brand among golfers of every age and skill level.

“I’m truly humbled by this incredible honour. This is something I would never have dreamed of as a young boy growing up in Verdun, working in my Dad’s machine shop. I’ve never forgotten where I came from, so to see my name on the same list of Canadian golf legends is overwhelming. I have always been surrounded by passionate, hardworking people who love the game as much as I do. This honour really is a reflection of everybody that has provided me the opportunities to live out my passion over the past 50 years in golf.”

Darling Evans and Vokey will be officially inducted into the Canadian Golf Hall of Fame during ceremonies to be held later this year.

For nearly a decade, the name Judy Darling Evans was synonymous with amateur golfing success. She was born on October 6, 1937 in Montreal and was first introduced to the game at Whitlock Golf Club where her grandfather, J.A. Darling—a Quebec Amateur champion himself— served as the club’s first president.

Through the years, the Darling family was an institution at the Whitlock club. Judy’s father, Bill won 11 club titles as well as the Western Canada championship. Her mother, Dora, twice captured the Québec Women’s Amateur crown and won the Canadian Women’s Amateur Championship in 1936. Her sister Mary was a three-time Québec junior champion. As well, her brother Brian was twice named to the junior interprovincial team and was a five-time member of the Québec team in matches against Ontario.

By age 19 she had become one of the province’s elite players. In 1957 she captured the first of five consecutive Québec Women’s Amateur crowns (1957-1961), earning her the distinction of becoming the first golfer to win both the Quebec Junior Girls and Quebec Women’s Amateur titles in one year. She carried that success to the national level by capturing the 1957 Canadian Junior Girls’ crown.

Judy’s domination at the provincial and national level earned a selection to the Canadian women’s golf team competing in the 1959 Commonwealth Games in St. Andrews, Scotland. She would help Canada finish second at the four-nation event.

In 1960, after graduating from McGill University, she would finish runner-up in the Canadian Ladies’ Close Amateur Championship before winning the Canadian Women’s Amateur Championship. The victory was historic as it marked the first time a mother-daughter duo – her mother Dora won the Open title in 1936 – would have their names inscribed on the Duchess of Connaught Trophy. That year she would rank third in voting for Canadian Female Athlete of the Year.

In 1961, Darling Evans captured her record fifth consecutive Québec Ladies’ Amateur title and went on to successfully defend her Canadian Women’s Amateur Championship crown. She was again nominated for Canadian Female Athlete of the year, eventually finishing second in the balloting. Later that year Judy Darling would wed Douglas Evans.

The summer of 1962 brought different joy with the birth of her first child, daughter Katherine. Eight months later, after taking more than a year off from golf, Darling Evans accepted the invitation to play for Canada in the 1963 Commonwealth matches in Australia. Those Commonwealth matches were to be her last hurrah as a competitor as she redirected her focus toward family life.

Competitive golf made way to recreational enjoyment as her family grew to include four children, Katherine (1962), Cynthia (1964), Tracey (1967), and Daphne (1969). In 1970, she rejoined Royal Montreal Golf Club and two years later entered the Québec Women’s Amateur Championship. Although she had spent nearly a decade away from competitive golf, her talents led to capturing her sixth Amateur title in 1972.

Amateur golfing success continued into her later years with a win (1988) and runner-up finish (1989) at the Québec Senior Women’s Championship.

Darling Evans career as one of Canada’s most accomplished amateurs was recognized with induction into the Quebec Golf Hall of Fame in 1988.

Bob Vokey was born in 1939 in Montréal, Québec. and credits his early inspiration in club design to the summers he spent with his father, a fine tool and die maker who had a penchant for golf and enjoyed tinkering with equipment.

He was a three-sport athlete in hockey, baseball, and football growing up and his talents on the football field led to a professional stint with the Québec Rifles of the United Football League as a punter, receiver and safety. He moved to Southern California in 1965 to work for AT&T laying telephone lines and it was during this time that he developed a passion for golf and the tools required for golfers to play their best.

In 1976, he pursued his passion by opening Bob’s Custom Shop which offered club building and repair services. From there, it didn’t take long for the ‘Bob Vokey’ name to become synonymous with craftsmanship within the South California golf community.

In 1986, he joined TaylorMade as their primary club builder in the company’s Tour department. It was during this time that he developed relationships with players such as Lee Trevino, Seve Ballesteros and Mark O’Meara.

In 1991 he joined Founders Club and continued to gain the trust of the game’s greats including Lanny Wadkins and Peter Jacobsen with performance products that included the TV-1 Irons, Founders Forged and Fresh Metal Plus metal woods.

In 1996, the lead club designer at Titleist, Terry McCabe, asked Vokey to join him in the R&D and Tour Departments. His first project at Titleist was assisting with the final design of the Titleist 975 driver, which quickly became the No. 1 driver in play on the PGA Tour in 1996.

Shortly thereafter, Titleist CEO Wally Uihlein entrusted Vokey with the task of driving the company’s wedge business. The 456.14 wedge was the first Vokey Design wedge in play on the PGA Tour when it debuted in the summer of 1997 and introduced to the consumer market in 1998.

Vokey’s innovation with wedge design introduced popular concepts such as bounce and grind into golf equipment lexicon. The 400 series Vokey Design wedges delivered the finest in product design and committed service to the world’s best players and were complimented by 200 and 300 series wedges from 2000 to 2004. In 2004, Vokey Design wedges became the No. 1 wedge in play on the PGA Tour, a distinction of excellence that continues today.

In 2005, Vokey’s innovation introduced the Spin Milled groove cutting process, which ultimately led to Vokey Design wedges becoming the No. 1 wedge in the world’s largest consumer market, the United States, in 2009, a market leadership position it has held now since 2011.

Vokey and his design team continue to focus on innovation and in 2016 introduced ‘progressive centre of gravity’ to the wedge category with the Spin Milled 6 models. The technology represented another leap in wedge design from custom sole grinds, to spin milled grooves and centre of gravity precisely positioned based on loft. Each innovation to this day is grounded in Vokey’s commitment to the golfer, and his mission to deliver the best in wedge play performance.

Earlier this year, his contributions to the game were honoured with election into the Quebec Hall of Fame. 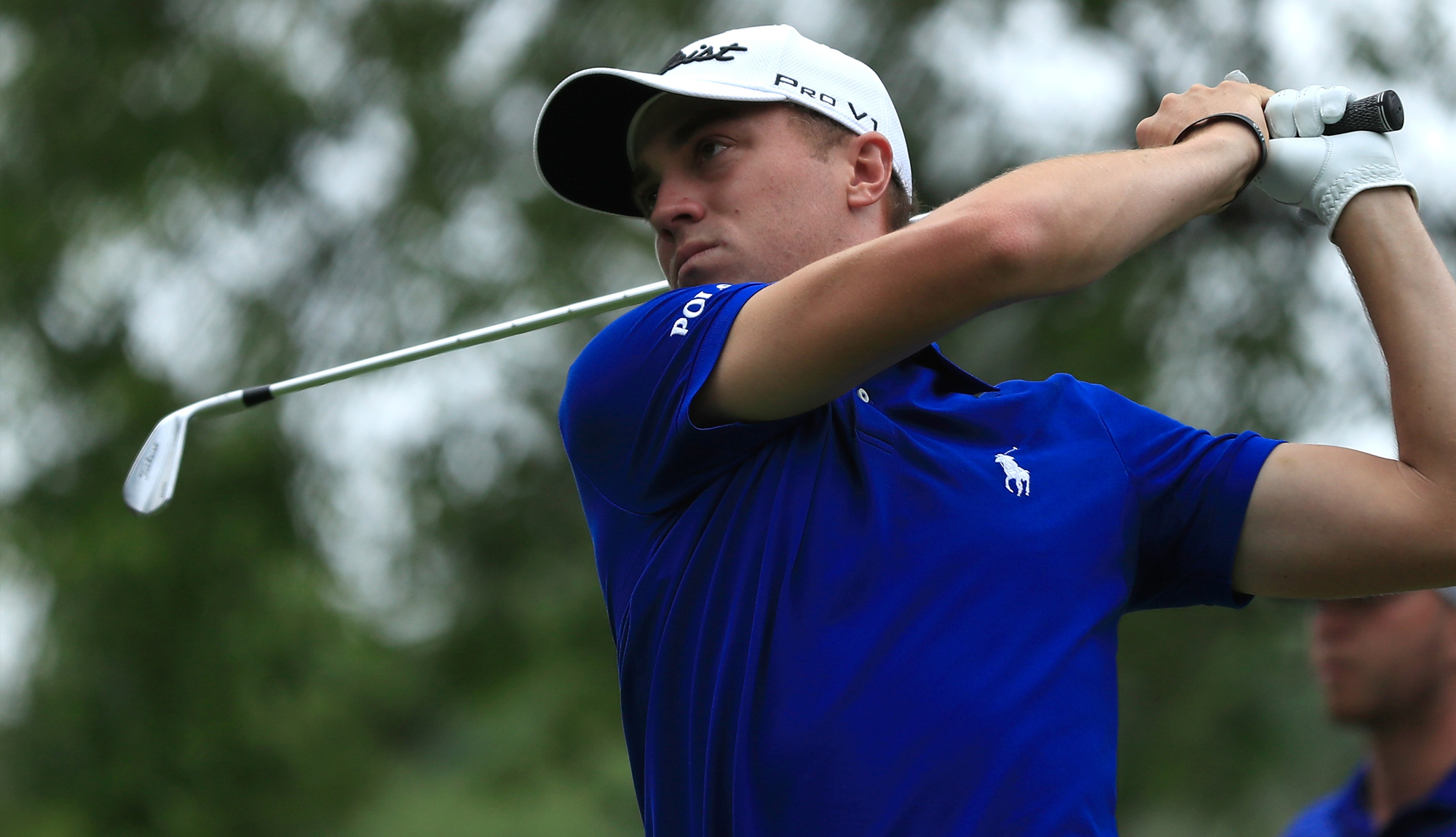 Justin Thomas makes an ace and takes lead in Mexico