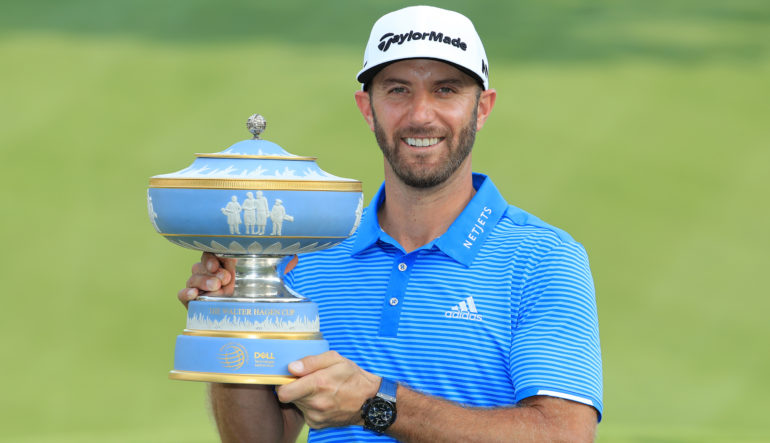 AUSTIN, Texas – Dustin Johnson won the Dell Technologies Match Play with more drama than he needed to cap off an otherwise dominant week that made him the first player to sweep the four World GolfChampionships.

The scorecard will show Johnson never trailed in any of his seven matches over 112 holes, ending with a 1-up victory over Jon Rahm for his third straight victory that left no doubt who was No. 1 in the world.

The look of concern, especially as Rahm made a bold charge in the final hour Sunday, spoke to a long day.

Johnson was 4 up with six holes to play when the Spanish rookie with a big game and no fear hit driver over the water and onto the 13th green to win the hole with a birdie. He stuck a wedge close on the 15th for another birdie. Rahm hit a shot through the trees on the 16th and won the hole with a 30-foot birdie.

The rematch Rahm wanted against Johnson, who held him off in Mexico City three weeks ago, ended the same way.

His big rally was a little short.

Playing the 356-yard 18th hole for the first time in competition all week, and needing a birdie to send this heavyweight bout to overtime, Rahm smashed driver over the back of the green. But his chip down the slope checked up and stayed short of the ridge, and he had to settle for par.

Johnson came up just short of the green, chipped to 30 inches and rolled in it to complete another big week.

“That was a tough day, a long day,” Johnson said. “I’m proud of the way I played, the way I hung in there.”

None of his first five matches went longer than 16 holes until Sunday, when Johnson faced the first threat of the week. Hideto Tanihara caught him with two birdies on the back nine, and Johnson needed a pitching wedge to 6 feet on the short but troublesome par-3 17th to take the lead again. Then, he had to make an 8-foot par putt to beat Tanihara and avoid extra holes.

Rahm, who dispatched of Bill Haas in the semifinals, 3 and 2, wanted to face the hottest player in golf in the championship. And for the longest time, it looked as though the 22-year-old Spaniard regretted it.

Rahm gave away three straight holes by missing par putts from 6 feet and 8 feet, and missing a birdie putt from 4 feet. Johnson stretched his lead to 5 up with yet another bogey by Rahm, and it looked as though this match might be over early.

Rahm, who already is No. 14 in the world in just his 15th tournament as a pro, began chipping away. Johnson three-putted the 10th hole for the third straight match, regained momentum with a two-putt birdie on the 12th hole – Rahm hit his tee shot downhill and downwind at 438 yards, Johnson at 424 yards – and then the Spaniard began his remarkable rally that came up short.

The result was another victory for Johnson, the 15th of his career, and makes him the clear-cut favourite at the Masters in two weeks. The next stop is the Houston Open, where another victory would make him the first player since Tiger Woods in 2008 to win four straight tournaments.

Dustin Johnson defeats Jon Rahm 1UP to win the @DellMatchPlay for his third consecutive victory. pic.twitter.com/at1GgFeqkA

Johnson became just the second player in the 19-year history of this event to never trail the entire week. Luke Donald did it in 2001, but that was before round-robin play and so Donald played only six 18-hole matches that week.

Not only did Johnson never trail, he led in 94 per cent of the holes he played. Donald was ahead in 91 per cent of his matches.

Johnson previously won the Mexico Championship earlier this month (and Cadillac Championship at Doral in 2015), the HSBC Champions in Shanghai in 2013 and the Bridgestone Invitational last summer at Firestone.

That gives him five World Golf Championships, well short of the 18 that Woods won. Woods only played the HSBC Champions twice after it became a WGC event in 2009.