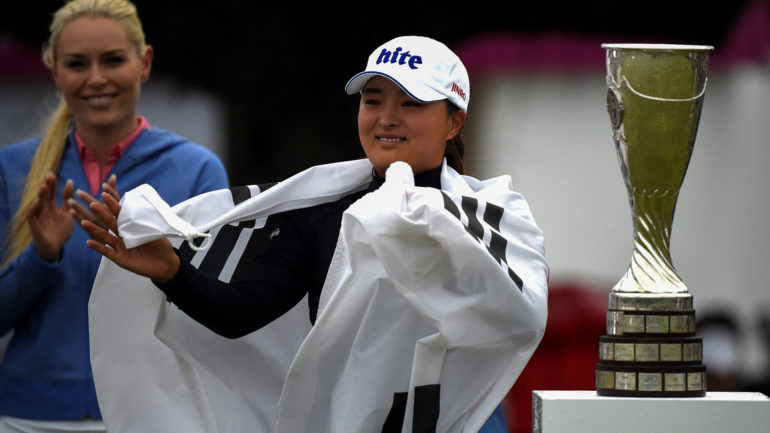 EVIAN-LES-BAINS, France – Jin Young Ko took advantage of a friend’s bad luck to win her second major title of the season on Sunday, and reclaimed No. 1 spot in the women’s world golf rankings.

Ko fired a 4-under 67 in the rain-swept final round to win the Evian Championship by two shots with a 15-under total of 269.

Winner of the season’s first major, the ANA Inspiration in April, Ko closed out the victory after playing partner, longtime leader and good friend Hyo Joo Kim lost control of the tournament with a triple bogey at the par-3 14th.

Ko took the two-shot lead she was given, and added a birdie at the par-4 No. 17, to hold off strong finishes by American rookie Jennifer Kupcho (66) and Shanshan Feng (68).

The 24-year-old South Korean played the par-5 18th with a two-shot cushion and no drama. Kim (73) made a birdie to join a three-way tie for second with Kupcho and Feng.

Ko said her play was “a little perfect,” after getting the silver trophy presented by ski great Lindsey Vonn.

Ko acknowledged feeling sad for Kim, the 2014 Evian champion whose challenge was undone after a tee shot at No. 14 plugged beneath the front face of a green-side bunker. Kim’s first salvage attempt rolled back from the grass into a deep footprint in the sand. Kim then three-putted.

“The lie was so bad. It was really unlucky for Hyo Joo,” said Ko.

The winner’s check of $615,000 lifted Ko atop the LPGA money list with almost $2 million this season.

A second career major for Ko, the 2018 LPGA Rookie of the Year, also means she goes back to No. 1 in the world rankings above her other playing partner, Sung Hyun Park.

Park (75) was let down by her putting in falling to a tie for sixth at 10 under.

A final round played in steady rain ended in fading light at 7:35 p.m. local time (1735 GMT). The start was delayed by two hours to prepare the Evian Resort Golf Club course after overnight downpours.

In her second major as a professional, the 22-year-old Kupcho impressed by shooting a bogey-free, lowest round of the day in persistent rain and cooling winds.

“It’s crazy. It’s exciting to see that I can compete,” said the Colorado native, untroubled by the dreary weather. “I just say, ‘Well everyone’s playing in it, so we’re going to be out here.”’

Kupcho was the first woman to win at Augusta National, in the inaugural Women’s Amateur in April, and played apparently nerveless golf until her final 4-foot putt. She made it to secure a check for $289,000.

“Standing over this putt on 18 I was kind of freaking out,” said Kupcho, who was an NCAA champion at Wake Forest. “I had to take a couple of deep breaths as I was lining it up.”

Kupcho had begun the day seven shots behind Kim, and three behind Ko. Though Park seemed favoured, three shots ahead of Ko, she opened with two bogeys and struggled to find rhythm.

Park ended with another bogey 6 at the 18th, playing her approach into flower beds beside the green, and hacking out across the putting surface into more thick grass.

The Jutanugarn sisters from Thailand both shot 68 to secure top-10 finishes.

Ariya Jutanugarn made eagle-3 on the 18th to finish alone in fifth place on 11 under, and elder sister Moriya tied for sixth with Park.

The next starts Thursday, when the Women’s British Open begins at Woburn, England. It’s the first time since 1960 that two women’s majors have been played in back-to-back weeks.

On Sunday morning, Ko cancelled her scheduled evening flight for England. It was among many good moves she made at Evian. 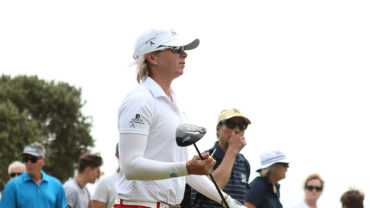