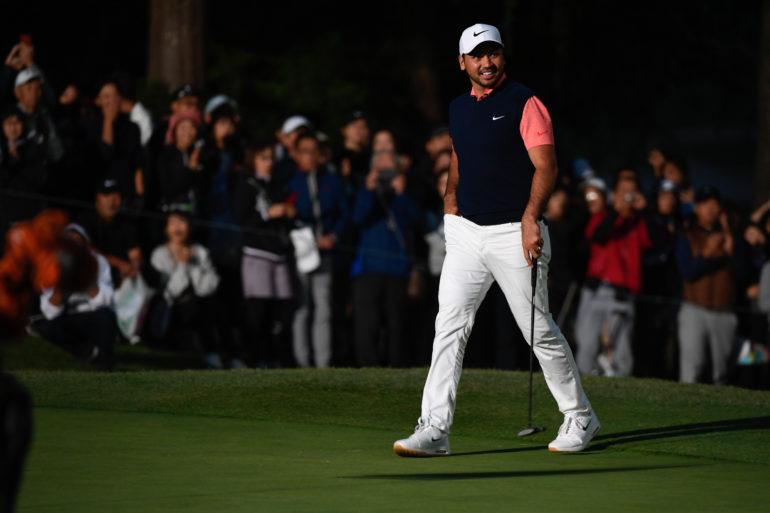 Turning to Woods after receiving the trophy, Day asked how many similar events Woods had played in.

“Tiger, this is what – your fifth of sixth?”

Before Woods could reply, Day supplied the rejoinder.

“He hasn’t won one yet. I found that out today when he told me.”

Woods and everyone else laughed, which captured the lighthearted day at the Narashino Country Club, where the made-for-TV skins game finished under floodlights on the 17th and 18th holes.

“First time I’ve ever finished under lights, so that was exciting,” Day said, surprised the sun goes down about 5 p.m. in the fall in the Tokyo area.

“I’m disappointed I had only one,” Matsuyama said, speaking through an interpreter and also getting a laugh.

It was Woods’ first event after surgery two months ago, the fifth on his left knee. He’ll get a stiffer test at the Zozo Championship that opens Thursday – the first-ever full PGA Tour event in Japan.

Wood said it was great “just being able to compete again. I haven’t done this in a little bit now.”

By his own assessment, he started very slowly.

“I did not play well at the beginning,” he said. “I hit a lot of bad shots and did not putt well. Once I got into the flow of competing and feeling the round, it just got exciting. We were competitive, the banter was great, the back and forth.”

Woods, who had a hand in organizing the event, said he hoped “we were entertaining everyone and everyone who’s watching had a good time.”

On No. 4, Woods seemed to try to take advantage of the fact the Narashino Country Club has two greens on every hole. It’s a tradition at some courses in Japan, alternating greens to keep them both in good shape.

Woods hit a shot between two greens and Day got on him.

“I hit in between the greens, so it looked kind of like I kind of didn’t know what I was doing,” he said.

Both greens at No. 4 will be used this week at the tournament. A hole will be cut in each and players will choose which to play to.

The Narashino club is located about 50 kilometres (30 miles) northeast of Tokyo in Chiba prefecture. The course for next year’s Tokyo Olympics will be at Kasumigaseki Country Club in neighbouring Saitama prefecture.

Four famous rugby players really got the match moving at No. 7 when they paired up with the pros for one hole.

Matsuyama dropped a 35-foot putt for birdie, and then was embraced by his teammate – former South African rugby player Bryan Habana. The 100-kilogram (220-pound) Habana almost crushed Mastuyama as he screamed: “That’s my partner.”

Walking one fairway, McIlroy was asked by a TV interviewer about comments by Brooks Koepka about the Irishman’s game.

Koepka said last week: “Rory hasn’t won a major since I’ve been on tour, so I don’t view it as a rivalry.”

McIlroy last won a major in 2014 at the PGA Championship.

McIlroy said Koepka “wasn’t wrong. He’s been the best player in the world for the last couple of years. Four majors. I don’t think he needed to remind me I haven’t won in a while. And I love Brooks. He’s a great guy; obviously super-competitive like we all are. I can see where he’s coming from.”

McIlroy then paused and also added: “I think that’s good for the game, and I think if you take what Brooks said out of context – then it can become this big thing it’s become. Brooks and I are good. We’re good friends.”