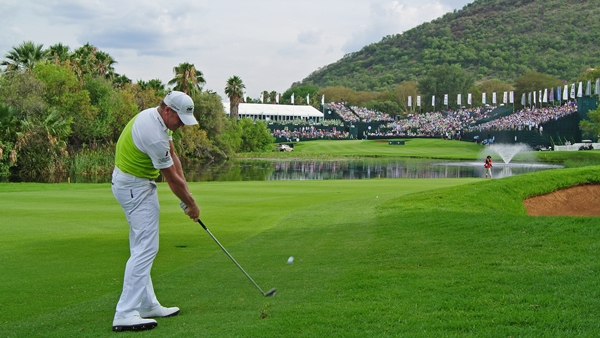 SUN CITY, South Africa – Jamie Donaldson held on to his three-shot lead through the third round of the Nedbank Golf Challenge on Saturday, putting the Welshman in sight of the biggest payday of his career on his Sun City debut.

The Welshman strung together six birdies and just a single bogey on No. 17 in a 5-under 67 to stay ahead of a two-way tie for second between Ryan Moore of the United States and Thomas Bjorn of Denmark. Donaldsson had a 16-under total of 200.

Henrik Stenson, playing his first tournament since clinching the European money title last month to go with his FedEx Cup, was five shots back after a 69, tied with Sergio Garcia (66) and Thongchai Jaidee (66).

Donaldson had his birdies in twos at the Gary Player Country Club, with back-to-back gains on Nos. 4 and 5, 10 and 11, and 14 and 15 for a good chance at the $1.25 million winner’s check at the newly-instated European Tour event. Before this week, he last played the course nearly 20 years ago.

“Every win is special, this would be just a little bit more special,” he said.

Moore, another Sun City debutant, went bogey-free to card 67 and is also attempting to become the first rookie winner at the Nedbank since Zimbabwe’s Mark McNulty in 1986. Bjorn had a 66.

Ernie Els struggled to a 77 after hearing before the third round that his former mental coach Jos Vanstiphout had died. Els said it was “another very sad day” for him after the death of former South African President Nelson Mandela on Thursday.

Bjorn opened his back nine with an eagle and a birdie, but made bogey on the par-5 No. 14 to slip back again before finishing with his fifth birdie. Moore was flawless with five birdies and no dropped shots.

Former Sun City winner Stenson recovered from a seven on No. 9, when the No. 3-ranked Swede twice hit the water, to birdie four holes coming home and stay in contention.

Garcia bounced back from a 73 on Friday, making six birdies and an eagle on No. 13 to counter two bogeys.