Jaclyn Lee: A model of development 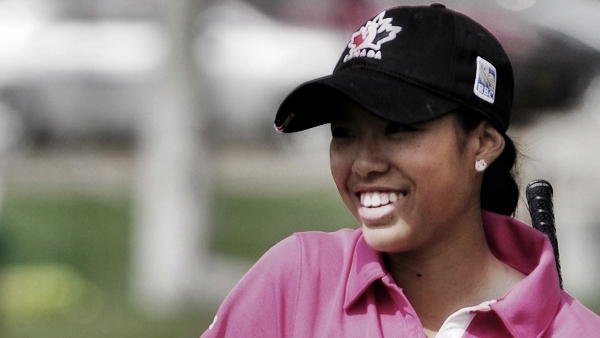 Lee, a Calgary native, grew up playing the game with her sister, mother and father – making a natural foursome. Her interest in the game led her to Two Eagles golf course in Kelowna, B.C. where she became a junior member at the age of twelve, playing every day of the summer with her family.

As the practicing and playing continued, Lee’s talent was noticed by many locals around the golf club.

“It’s funny, actually, I was encouraged by one of the course marshals who saw me play. He advised me to pursue the game further and that kind of gave me the confidence to take my game to the next level.”

Not long after, Lee was participating in club championships and junior tour events.

Eventually, her talents were on display nationally at the 2013 CN Future Links Junior Skills Challenge. That year, Lee was one of the top four scorers for girls aged 15-18 to be invited to the national event at the Canadian Women’s Open, held at the Royal Mayfair Golf Club in Edmonton.

As you may have guessed, Lee captured the CN Future Links National Skills Challenge title that year. With the win, she gained a new sense of confidence and was labelled a top golfing prospect.

“It was definitely a huge confidence booster for me,” said Lee. “The CN Future Links Jr. Skills Challenge was a great experience – the testing of all aspects of my game really put some pressure on my abilities and identified what I needed to work on.”

Then came the accolades.

In 2013, Lee went on to win the Alberta Jr. Girls and the CN Future Links Prairie Championship. In 2014, as a member of Team Canada, she successfully defended both of those titles while adding the Alberta Amateur title. She dominated the field at the CN Future Links Prairie Championship, winning by 13 strokes and breaking the course record (67) in the process.

As far as the future goes, Lee intends to continue following the competitive pathway. Her sights are set on moving up to the National Amateur Squad and potentially the Young Pro squad down the road.

“I would love to be able to make the National Team and work with Tristan (Mullally),” said the future Ohio State University student. “I really want to see how far I can take my talents and even having the Young Pro squad as a possibility down the road gives me something to work towards.”

Although the future is never fully clear, it certainly looks like a bright one for Canada’s Jaclyn Lee.