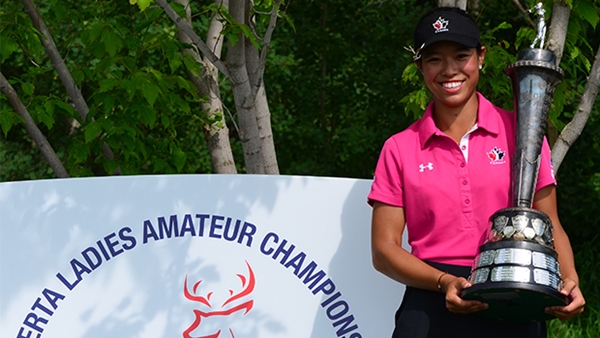 The Calgary native and Team Canada Development Team member had a great day in Mundare, shooting a 73 on the final day to close out the 54-hole tournament at 4-under. Her seven stroke lead at the turn made her nearly untouchable through the back nine as her partners and fellow Calgarians Jennifer Ha and Grace Howie finished the tournament at -1 and +15 respectively.

The final round presented competitors with a challenging 25 kilometer wind, but gifted them with blue skies and warm temperatures.

Lee will join Ha and Becky Martin of Medicine Hat on Team Alberta at the Canadian Women’s Amateur Championship in Woodstock, Ontario from July 22nd-25th at Craigowan Golf & Country Club.

In preparation for next week’s Alberta Junior Girls Championship at Bearspaw Country Club, Lee is happy with how her game is shaping up after three rounds in Mundare.

“My last three rounds definitely gave me confidence to know that I can play well next week,” said Lee. “I will take this confidence with me to Bearspaw and hopefully be able to play consistently throughout the week.”

Lee didn’t let the pressure of the final round get to her and was able to remained focused through the last 18.

“I thought of today as the start of the tournament and just wanted to play my best,” added Lee. “I wasn’t concerned with what Jen (Ha) was doing because I knew that things could change quickly if she got on a roll.”

Crediting the support of her team for her championship win, Lee was thankful to have such a great group behind her on and off the course.

“It’s the people like my caddy Landon Goselwitz, my coach Paul Horton, my Team Canada coach Ann Carroll and my mom that motivate me to continue playing the sport I love,” she said.

Jessica Luciuk of  Barrhead, Alta. finished at 7-over thru 54 holes and claimed the Mid-Amateur title. This is Luciuk’s victory in the category. But, that wasn’t on her mind going into today’s round.

“I’m honestly not even thinking about the Mid Amateur category when I come out to this tournament,” Luciuk said. “I’m just happy to be playing with some talented young players who challenge me to compete.”

The 2014 Mid Master Championship trophy belongs to Kim Carrington of Calgary as her final round of 78 secured her the title with a +15 tally over three days.