Juli Inkster to be next Solheim Cup U.S. captain 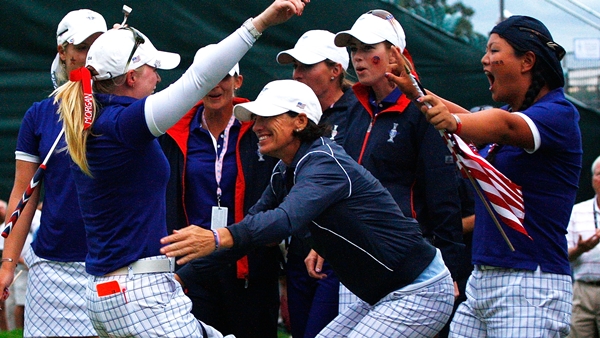 PHOENIX – Juli Inkster, the most prolific American in Solheim Cup history, has been selected captain of a team that has lost the last two times to Europe.

Inkster is to be introduced Tuesday night at the JTBC Founders Cup, the first domestic event of the LPGA Tour season. She holds the U.S. record for most Solheim Cup appearances (nine), most points won (18 1/2) and most matches won (15).

The Solheim Cup will be in September 2015 at St. Leon-Rot in Germany.

“It’s not do or die. You’re still going to be the same person when get on that plane and fly home, but it will be a lot more enjoyable flight if we have that cup with us,” Inkster said Monday during a conference call.

“It’s not rocket science,” she said. “You just go over there and play some golf, and I think the girls just … believe me, if they just play the way they should play, we’re going to have fun, and we’re going to win. The Europeans, they’re hungry. They always seem to play their best golf as a team during Solheim Cup. And we’ve just got to find a way to play to match their intensity and match their golf.”

Europe won in Ireland in 2011, and then steamrolled the Americans in Colorado last summer for its first win in the U.S.

Inkster is among the most respected players of a career that covers 30 years, 31 victories, seven majors and the career Grand Slam. She was the first woman to win three straight U.S. Women’s Amateur titles, and she won two majors as an LPGA rookie in 1984. She last played the Solheim Cup in 2011. Inkster had a 6-1-2 record in singles.

Inkster grew up in the era of Nancy Lopez, Pat Bradley and Betsy King. She relates just as easily to a younger generation, some of whom are younger than her two daughters.

“When we see all the highlight videos, Juli is in most of them, and she’s usually dancing around the green and having fun,” Stacy Lewis said. “And I think that’s what she’s going to bring to his. Like she said, we’ve played tight the last few years. We’ve played to not lose instead of just going out there trying to win. I think she’s going to help us relax a little bit and hopefully have a little bit more fun.”

Inkster said longtime friend Pat Hurst would be her assistant. They have played and traveled together for years. Inkster is all about instincts. Hurst is geared toward the details, which will be fewer as the visiting team in Germany.

Along with the respect from her Hall of Fame career and Solheim Cup career, Inkster said having daughters the same age as some players won’t hurt.

“I think I kind of know where they’re coming from and know what they’re thinking,” she said. “Hopefully, I don’t get any roll of the eyes, but you never know. But I do think it’ll help. No one wants to be micromanaged, and I don’t micromanage my kids, and I’m not going to micromanage the team. They know what they’re doing. It’s not like their first rodeo.

“I’m just going to be there to help them, guide them and lend an ear,” she said. “That’s pretty much what parenting is – helping them make the right decision. And, hopefully, I can do that with the kids.”