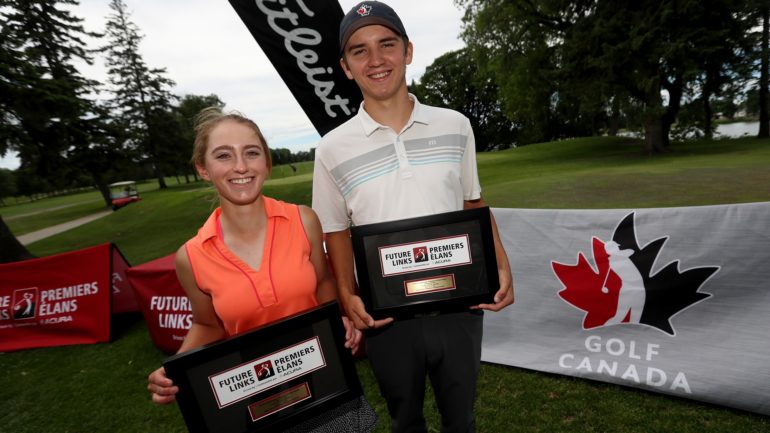 PORTAGE LA PRAIRIE, Man.— Wesley Hoydalo and Sydney Scraba shot 2 under and 13 over, respectively, to emerge victorious at the Future Links, driven by Acura Prairie Championship at Portage Golf Club on Sunday.

The junior boys, who failed to score in the red after two tough rounds, brought their A-game to the final day.

With three sets of consecutive birdies across his final 18 holes, Wesley Hoydalo, who started the day sharing the lead with Saskatoon’s Bradley Moser, fought hard to emerge victorious in the junior boys division. The Selkirk, Man., talent was the only player to finish under par at the tournament at 2-under-par 208.

“I started off great at 4 under through seven. I missed a few putts early but I got to 14 and went birdie-birdie and birdied 17, which was probably a highlight,” said Hoydalo. “Last year, I just missed it by a shot, so it feels really great to win.”

Next up for the 18-year-old is the Elmhurst Invitational, where he will compete for an exemption into the Canadian Amateur Championship.

Calgary’s Jakob Chicoyne put on a spectacular show, fighting hard during the final day to tie with Hoydalo for a tournament low (66) and earn a piece of second alongside Bradley Moser of Saskatoon, Sask., at 1-over-par 211.

The course proved to be challenging for the junior girls during the final round of the tournament but Sydney Scraba managed to hold on to her lead, carding a 7-over to secure a four-stroke victory in the junior girls division at 13-over-par 229.

The 17-year-old started the tournament tied for fourth but moved up the leaderboard on Saturday after being the only junior golfer at the tournament to score under par after two rounds.

“I finished the way I wanted to on Father’s Day with my dad, so it’s a really good moment for him and I to spend together,” said the Calgary, Alta., native. “I’m so grateful that I got to play really well and see how good I can become when I go to college in August. I’m quite excited for what’s going to come to me.”

Michelle Liu of Vancouver, B.C., ended the tournament in second at 17-over-par 233 while Bobbi Uhl claimed third at 19-over-par 235.