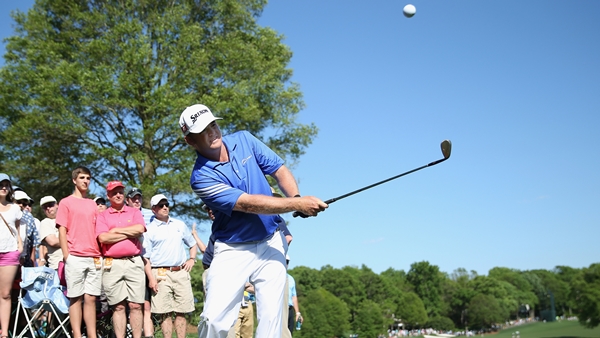 CHARLOTTE, N.C. – Phil Mickelson’s best round of the year wasn’t enough for him to stay in the lead Saturday in the Wells Fargo Championship, just enough to give him a chance to end his slowest start to a season in 11 years.

J.B. Holmes overpowered Quail Hollow on a good day for scoring, and he made a 20-foot birdie putt from the fringe on the final hole for a 6-under 66. That wound up giving him a one-shot lead when Martin Flores made his only bogey on the final hole. Mickelson had a 63 and was two shots behind.

Flores hit his tee shot into the creek left of the 18th fairway and missed a 20-foot par putt, settling for a 69 that at least put him in the final pairing with Holmes.

They’ll be looking at Mickelson, who filled the course with one big cheer after another. Mickelson rolled in birdie putts of 30 feet on No. 4 and 40 feet on the par-3 sixth hole and went out in 29. He took the outright lead with a 7-iron from 216 yards into 10 feet on the 13th hole and closed with a par as exciting as some of his birdies. After having to lay up out of a fairway bunker, his wedge spun by the hole and left him a tap-in for par.

“I don’t think I’ll be leading at the end of the day because I think there are some birdies out there,” Mickelson said. “But just to be in contention, and to have a chance at a golf course that I’ve become so close to over the years, I’m excited about tomorrow’s round.”

Not since 2003 – his last winless year on the PGA Tour – has Mickelson gone this deep into the season without a victory. This year has been so difficult, mainly through injuries, that he doesn’t even have a top 10.

Holmes only last week secured his card for the rest of the year through a medical extension from ankle surgery last year. He hasn’t won since the Phoenix Open in 2008, though he can be scary when he’s finding fairways with his enormous length.

He birdied all the par 5s and only dropped one shot.

Holmes was at 13-under 203, and he’ll have inexperience at his side. Flores is in his fourth full year on the PGA Tour, and he has never finished in the top three. That would have been hard to guess by the way he played. Flores kept it simple on a gorgeous afternoon and never had more than 4 feet left for par until his final hole. He blew past Mickelson and built a two-shot lead after the turn when he made three straight birdies, the last one from 40 feet just off the 12th green.

Only the finish knocked him out of the lead.

Even so, the strong player by Holmes and Flores on the back nine at least gave them some separation. Midway through the third round, nearly two dozen players were separated by only four shots.

When it ended, the list of serious contenders was considerably smaller.

Justin Rose (71) and Jason Bohn (67) were four shots behind. Former PGA champion Martin Kaymer bogeyed his last two holes for a 70 and was five behind.

Rory McIlroy set the tone for the low scoring. Coming off a 76 in which he missed five putts from 6 feet or less, the two-time major champion made five birdies in his opening eight holes and saved par on the 18th for a 65. But at the end of the day, that left him seven shots behind.