Henderson shares 12th ahead of Sunday finale in L.A. 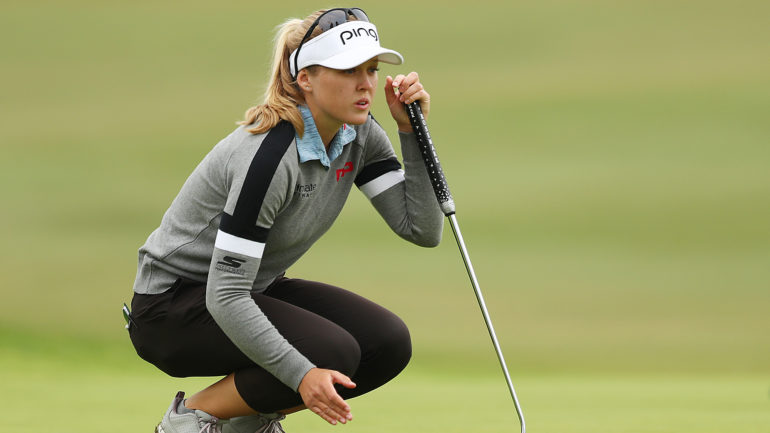 LOS ANGELES – Minjee Lee overcame a triple bogey Saturday to take the lead into the final round of the Hugel-Air Premia LA Open.

Lee shot a 4-under 67 to reach 11-under 202 at Wilshire Country Club. She birdied the first two holes before dropping the three strokes on the par-4 third after her second shot clipped a tree branch and her 50-yard third went over the green.

“Sort of fought my way back to my score today,” Lee said. “After that (triple) I wasn’t super nervous or anything. I just sort of tried to believe in myself and just go out there and make as many birdies as I can, try and hit as many good shots as I can.”

Ranked fourth in the world, Lee won the last of her four LPGA Tour titles in May in Michigan in the LPGA Volvik Championship. She tied for third last week in Hawaii for her third top-three finish of the season.

“Both of us, Nanna and I, we made a lot of birdies today,” Lee said. “I think we sort of fed off each other, which was really nice. Yeah, nice confidence for tomorrow.”

“I’m glad to be done,” Koerstz Madsen said. “I got the putter going on the last couple holes, but it was a little bit shaky all day kind of.”

“Do the same thing as the last two days, three days,” Koerstz Madsen said. “Really just focus on my own game. If it’s enough, that’s good and I’m happy with whatever. I mean, I’m already happy with how I’ve been emotionally this week. Just going to enjoy tomorrow I think.”

Inbee Park was 7 under after a 68. The South Korean star has 19 LPGA Tour victories – seven in majors – but is winless in more than year.

“It’s extremely hard to stay patient on these greens,” Park said. “I really feel like I should be 15-under par easily by now. These greens are just so complicated, and you can’t be aggressive or it’s either you leave it a foot short or you’re 5 feet by.”

Top-ranked Jin Young Ko and Morgan Pressel were 6 under. Ko had a 67. She’s the only player with multiple victories this year, taking the Founders Cup in Phoenix and the major ANA Inspiration in Rancho Mirage.

“It’s just tough to be aggressive on a lot of these putts out here, even when you’re uphill,” Pressel said. “You don’t want to be left with a downhiller coming back, especially late in the day. Poa can get a little bit bumpy.”