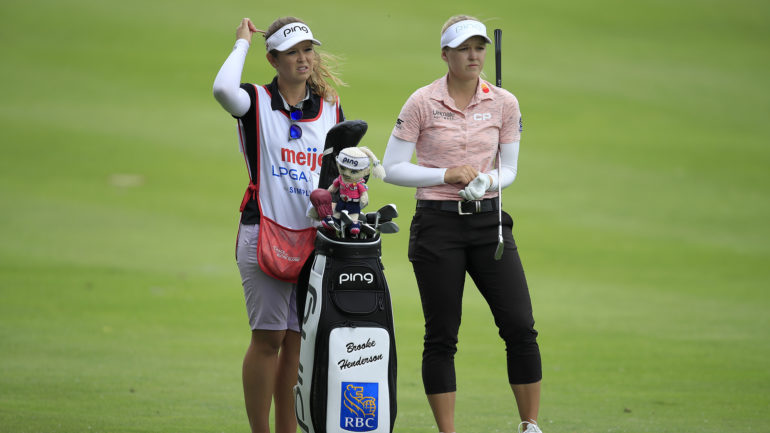 GRAND RAPIDS, Mich. – Brooke Henderson birdied the final three holes Saturday for a 3-under 69 and a two-stroke lead over Annie Park in the Meijer LPGA Classic, with Lexi Thompson three shots back after matching the course record with a 62.

Trying to break a tie for the Canadian victory record for both women and men, the 21-year-old Henderson had a 19-under 197 total at Blythefield Country Club. She opened with consecutive 64s, playing 30 holes Friday after rain delayed the start Thursday, then got off to a slow start Saturday with three birdies and three bogeys in the first 15 holes.

“I kind of found it hard to find my rhythm during the middle part of the round, so I kind of got started batting third and that’s never a good sign,” Henderson said. “But to come back with three birdies at the end there makes the round feel a little bit better.”

“Of course, that’s in the back of your mind, but it’s long from over,” Henderson said. “There’s so many great players close to the top of the leaderboard. And this course, you know there’s a lot of birdies out there, so it’s going to take a low score. So, hopefully, I can just continue to hit good shots and give myself a chance for the win.”

Park birdied the par-5 18th for her second straight 65.

Three straight birdies to close out the round for @BrookeHenderson 🙌🏼🙌🏼

She takes a 2-stroke lead into the finale at the @MeijerLPGA pic.twitter.com/LAE8S5Slc3

“Overall, it’s been good with shots, short game, putting,” Park said. “Hopefully, I can keep that momentum going on for tomorrow. I can’t wait.”

The American returned early Saturday to complete the final hole of the suspended third round, making a birdie on 18.

“Took a good nap in there,” Park said.

The winner last week in New Jersey, she had the eagle, 10 birdies and two bogeys.

“I had a good warmup on the range, felt good about my game,” Thompson said. “The last two days I haven’t struck it to my capability and what I’ve been working on in my game, but today it kind of all fell together.”

Brittany Altomare matched Thompson at 16 under with a 69.

Hamilton’s Alena Sharp shot up the leaderboard with a 64. She’s tied for ninth at 13 under. Quebec City’s Anne-Catherine Tanguay (72) is 3 under while Calgary’s Jaclyn Lee (73) is 1 under.

Jennifer Kupcho was another stroke back after her third 67. The former Wake Forest star is making her third professional start. She won the inaugural Augusta National Women’s Amateur in April and the NCAA individual title last year.

“Just go into it just like any other tournament,” Kupcho said. “I mean, I always like the chase, so I’ll just go out there and play my game and see what shows up tomorrow.”

The KPMG Women’s PGA Championship, the third major championship of the year, is next week at Hazeltine in Minnesota.