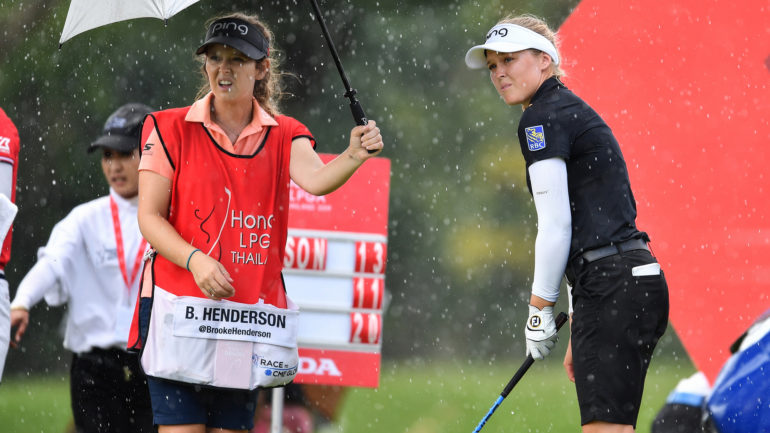 CHONBURI, Thailand – Amy Yang won the LPGA Thailand for the third time after holding off Minjee Lee by one stroke on Sunday.

Despite lightning stopping play for 50 minutes and a rain delay later in the round, Yang emerged from a three-way tie with Lee and Carlota Ciganda with a birdie from the fringe of the green on the par-3 16th to regain the lead at 21 under.

“I was honestly very nervous, especially last three holes,” said Yang, who also won the event in 2015 and 2017. “It was (a) tough hole to finish. I was really telling myself just (to) be patient, do (my) best at the time.

“I tried to stay calm and stayed patient out there. I just enjoy coming here. I love the golf course, which is why I always play well here.”

With Ciganda already signing off at 20 under, Lee, on the 18th, had the chance force a playoff if she made a 14-foot eagle putt. She didn’t, and she had to settle for a birdie to finish with a 66 at 21 under.

“I really fought out there,” said Lee, who was looking for her fifth LPGA Tour win. “Just tried to make as many birdies as I could. Probably didn’t play probably 15 and 16 the way I wanted to, but I think overall, I had a pretty solid performance.”

Ciganda finished at 20 under after having eagled the par-5 first and the par-4 15th. She shot a 63 on Sunday, matching Eun-Hee Ji’s score from Thursday as the lowest of the event.

“I hit lots of greens, (was) hitting great shots, great numbers, and then today, the putting was hot,” Ciganda said.