Henderson 4 back after opening round of Women’s British Open 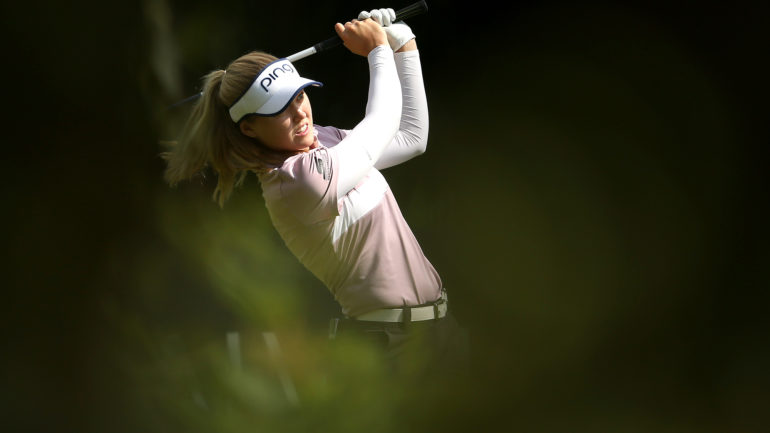 MILTON KEYNES, England – Ashleigh Buhai of South Africa shot a 7-under 65 to take a one-stroke lead in the first round of the Women’s British Open on Thursday.

Buhai finished just ahead of Japan’s Hinako Shibuno and American Danielle Kang, who each had a bogey in rounds of 66.

“In my last few tournaments I’ve had three good rounds and one not so good round, so I’m hoping this is the week I can do four good rounds,” said Buhai, whose best finish this year is a tie for 11th. “The last few weeks I have been just trying to stay mellow and keep everything in check, and it seems to be helping.”

Top-ranked Jin Young Ko, seeking her third major title of the year after winning last week’s Evian Championship in France, was well positioned after a 68.

“I’m not tired yet,” Ko said. “I will do my best for this week, and then I had just great playing today, so I’m just happy.”

Brooke Henderson of Smiths Falls, Ont., opened at 3 under 69, while Hamilton’s Alena Sharp shot an opening round of 2-over 74.

“I was just sort of making some key saves when I needed them, but just hitting the ball in good places and giving myself some looks, and it was really nice to finish with two birdies at 15 and 16 and kind of get my round to -3, and I feel like that’s a good position going into the next three days,” said Henderson.

Buhai, who has never won on the LPGA Tour, made her only bogey on the par-5 11th but responded with three straight birdies on Nos. 14-16. Her best previous British Open finish was a tie for 30th in 2017.

“Sometimes it’s harder when it’s your home golf course because you know where not to hit it as well as where to hit it,” Hull said. “Like today, for instance, the 13th hole, it’s the first time I’ve hit that fairway for about three years, so I was quite happy about it.”

Kang, who won the Women’s PGA Championship two years ago for her only major, missed the cut last week at the Evian Championship, allowing her to arrive early for the second of back-to-back majors.

“There might have been a little bit of a blessing in disguise that I missed the cut last week because I came here on Saturday actually and I got a lot of rest, I played a few rounds,” Kang said. “I like being prepared in a proper way and competing in a proper way.”

“I think it’s important for me to take all the emotions in and really enjoy it. I loved it out there today,” Hall said. “I just loved having so much support.”

Lexi Thompson, whose wayward passport after the Evian Championship caused a delay for a van carrying golf bags for nearly 40 players to Woburn, opened with a 71.