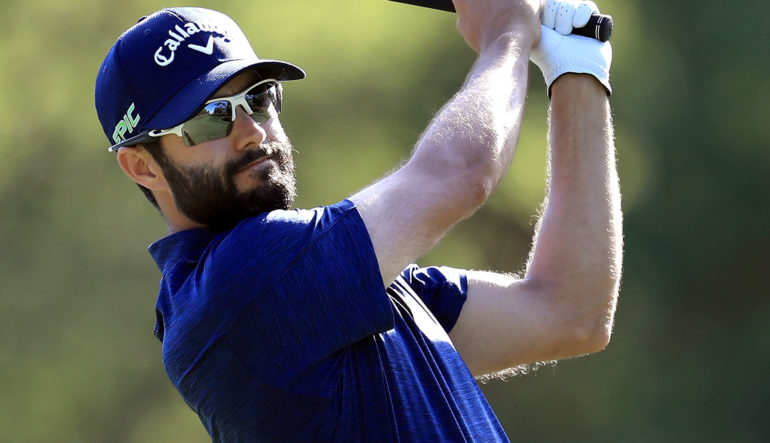 PALM HARBOR, Fla. – Adam Hadwin knows all about going low on the PGA Tour. Still to be determined is whether that translates into a victory.

The Canadian, who shot a 59 at the CareerBuilder Challenge two months ago, ran off five straight birdies to start the back nine Friday at the Valspar Championship and posted a 7-under 64 to take a one-shot lead into the weekend.

Even playing in the afternoon in a strong breeze and crustier putting surfaces, Hadwin one-putted every hole on the back nine until he had no choice but to lag a 20-foot birdie attempt on the 18th hole to make sure it didn’t race all the way off the green and into the fairway.

He shot 29 on the back and reached the halfway point at Innisbrook at 10-under 132, one shot clear of Jim Herman.

“You can’t go out and shoot 7 under on the Copperhead Course without doing everything right,” said the native of Abbotsford, B.C. “I put myself in position off the tee box, hit a ton of fairways then just really hit the irons solidly today. … And here I am going into the weekend.”

And he still has a long way to go.

Herman, coming off a 62 in the opening round, began with 11 straight pars before trading birdies and bogeys and settling for a 71.

Tyrone Van Aswegen had a 65 and was two shots behind, followed by a group at 7-under 135 that included British Open champion Henrik Stenson (71), Russell Henley (71) and Dominic Bozzelli (68).

Stenson opened with a birdie to get within one shot of the lead, but he didn’t make another one until holing a 30-foot putt on the 15th. He was fooled at times by the wind, which kept him from more reasonable birdie chances. Still, the 40-year-old Swede felt his iron play getting better, and he got one bonus that had nothing to do with golf. Walking down the second fairway, 2-year-old daughter Alice saw her dad and ran out to greet him.

“She doesn’t know how to stay outside the ropes, that’s for sure,” Stenson said with a smile. “She comes running in when she sees me. That was good.”

Stenson is No. 6 in the world, the highest-ranked player at Innisbrook. The Valspar Championship will be missing its other top 10 player because Justin Thomas, who swept the Hawaii swing, had a 74 and missed the cut.

Also missing the cut was Billy Horschel, leaving him no chance of qualifying for the Dell Match Play in two weeks. Horschel, who won the FedEx Cup in 2014 and reached as high as No. 12 in the world two years ago, has not been eligible for the last four World Golf Championships.

Hadwin could make his way into Match Play with a runner-up finish, though now it’s all about winning.

He became the ninth player with a sub-60 rounds on the PGA Tour in the California desert, only to finish one shot behind Hudson Swafford. A week later, he was in the final group Saturday at Torrey Pines until fading to a 74-76 weekend.

“I’ve put myself in position the last couple of years,” Hadwin said. “I feel like the finishes have gotten stronger, and I keep kind of putting myself there going into the weekends. Just getting more comfortable out there. Learnings how I feel under pressure, and figuring out how to deal with that. I’m excited for this weekend, what it will bring, and hope to keep some of these scores coming.”

PGA Tour rookie Wesley Bryan, best known for his trick shots that made him a YouTube golf sensation before earning a tour card, had another 68 and was only four shots behind. Bryan tied for fourth in his last two starts at the Genesis Open and Honda Classic.

He would need to finish seventh to have any chance of making the 64-man field for the Match Play in two weeks.

Also at stake this weekend is a spot in the Masters for the winner. Only three players from the top 12 going into the weekend – Stenson, Swafford and James Hahn – already are eligible for the Masters.

A year ago, Herman earned his first trip to Augusta National by winning the week before the Masters at the Shell Houston Open. He’d like to take care of that sooner, and playing in the last group Saturday gives him hope.

He wasn’t stressed by following a 62 with a 71, mainly because the conditions were tougher in the afternoon. Herman also knows a 71 isn’t going to hurt him.

“Any time you make par, it’s not like you’re backing up,” Herman said.