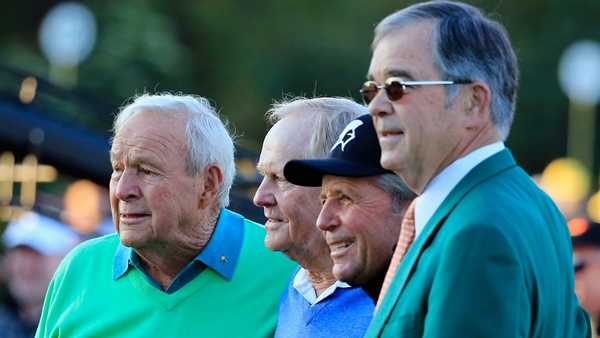 AUGUSTA, Ga. – The tee shot is ceremonial, yet there was a sense that competition still exists between the “Big Three.”

Or at least two of them.

Arnold Palmer, 84, hit the opening shot Thursday morning down the middle of the first fairway, barely up the hill. He was followed by 78-year-old Gary Player, who hit his tee shot some 40 yards past Palmer. Last to hit was Jack Nicklaus, the six-time Masters champion who turned 74 this year. Nicklaus hit a tee shot on the same line as Player, and it took once last bounce and rolled about a yard or two by Player.

“But it’s not bad when you think he used to outdrive me by 50,” Player said. “But he did hit on a sprinkler. You didn’t see that?”

Palmer’s drive was the most meaningful. He said at Bay Hill he would be having back surgery after the Masters that will help him enjoy the game more. Nicklaus said for Palmer to be an honorary starter “adds a year to his life.”

“I’ve never seen a man who loves the game as much as Arnold Palmer,” Nicklaus said.