Give stroke play a break this summer 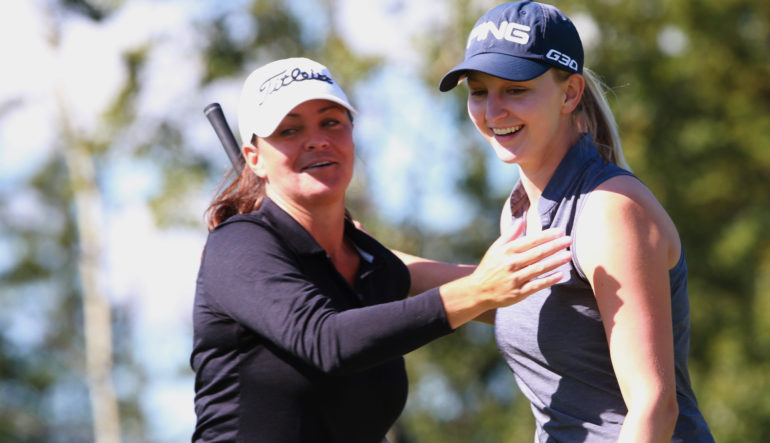 When the non-avid golfer thinks of the game, I’m willing to bet their immediate thoughts are classic stroke play, accompanied with your usual scorecard and pencil—but it doesn’t have to be.

Golf can be played in many forms. Throughout history, new game formats have continued to spring up, providing a different look at fun and enjoyment of your round. Some formats have been developed to include adjustments for Handicaps for social or competitive events. Others are variations on stroke play which allow the round to be posted in your Handicap—provided you track your hole-by-hole score.

There are a variety of different games you can play on course for you and your playing partners (single or team games) that you can try the next time you hit the course. We encourage you to try one or speak to other golfers to find others—you’ll never know unless you try one.

A group of four golfers can play this game with all players playing independently. The goal is to be the player with the most points at the end of the round.

The order of play is decided on the first tee. The “Wolf” is always the last player to tee off. The teeing order—regardless of who has the honour—rotates on every hole so that each player becomes the Wolf once every four holes.

Once each player in the group hits his or her tee shot, the Wolf decides whether or not to team up with anyone for the hole. If not, the Wolf plays the hole as the “Lone Wolf” – in which case the objective is to beat the three other players with the lowest net score on the hole.

Every hole is played as a net best ball with only the best score of each team being used.

If the Wolf chose a partner and they win the hole, both receive two points.

If the non-Wolf partners win the hole, they get three points apiece.

If the Lone Wolf beats all the other players, he/she receives four points.

NOTE: There are variations to this game. For instance, you can be “Blind Wolf” (like a poker player going all-in without even looking at his or her cards before the flop) declaring before the hole that you’re going solo.

The first step is to assign a point amount to each hole. Each player in the group contributes a predetermined amount for the “kitty” on each of the holes. The lowest net score on each hole wins the skin. Should more than one player tie a hole, the skin carries over. Whoever wins the next hole outright wins the skin for that hole as well as any skins that carried over.

You might be struggling for the first five holes, but it’s possible that all five of those were carried over with tying scores—giving you a chance to catch lightning in a bottle and birdie the 6th hole to win the lot (along with a good ribbing from your group).

Some variations are used in skins: for instance, a player who wins skins needs to “carry over” to “validate” them on the next hole. They must at least match the lowest score on the next hole to collect the skins. If another player records a lower score on the next hole, he or she can steal the skins, but then must also validate (unless this happens on the final hole, in which case the match is simply over.

The Nassau format can be broken up into three components: low front nine score, low back nine score and low total score. If you’re in a foursome, you might decide on a $2 Nassau. If you lose all your bets, the most you can lose is $6. If you win all three, you win $18 ($6 from each of the other three players in your group).

NOTE: a variation of this game is to introduce a “press.” A “press” is a second call/game that runs concurrently with the original game. The second game is usually for the same amount as the first game.

Below are some ideas you can combine different smaller game formats throughout the round.

Greenies: a point is awarded for hitting the green in regulation. Points accumulate within the group, and the player with the most points at the end of the round wins this category.

Chippies a point is awarded for chipping in from off the green. Points accumulate within the group, and the player with the most points at the end of the round wins this category.

Barkies: a point is awarded for hitting a tree and still making par. Points accumulate within the group, and the player with the most points at the end of the round wins this category.

Double barkies: a point is awarded for hitting two trees and still making par. Points accumulate within the group, and the player with the most points at the end of the round wins this category.

Fishies: a point is awarded for making par on a hole in which you found the water. Points accumulate within the group, and the player with the most points at the end of the round wins this category.

Sandies: a point is awarded for getting out of a bunker and making par. Points accumulate within the group, and the player with the most points at the end of the round wins this category.

Note: You are free to make up new games or to change the game name to suit your purposes. The important thing is to put some spice into the game.

You can accumulate ALL POINTS within each category above or a mix of a couple categories for a complete point total for all players within the group, the player with the most points within the group wins.

For more examples of game formats visit golfcanada.ca/handicapping and try something new this season!

Have a game format to share? Let us know by contacting members@golfcanada.ca