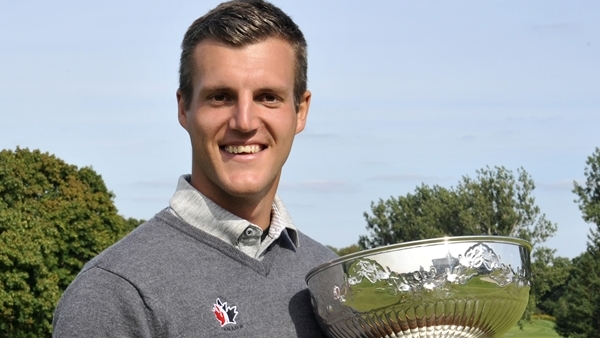 Rank, 27, finished the championship tied with Rob Couture of Dallas, Texas at 4-under 284 after Couture forced the pair into a playoff by birdieing the par-5 18th hole in regulation.

The pair headed back to No. 18 tee for the first playoff hole, where Rank found the right rough off the tee. He went on to hit a magnificent 3-iron, leaving just 20 feet for eagle, putting the pressure squarely on Couture.

“It wasn’t a great lie, it was advanceable and I knew I could get some club on it,” Rank said. “I just took one extra club and it came out perfect. When it was in the air I knew it was going to be pretty good.”

After Couture’s approach from the fairway came up short, he left his third shot 20 feet below the hole and couldn’t convert his birdie putt after watching Rank’s eagle putt slide by. The stage was then set for Rank who was left with only a tap-in birdie for the victory and a spot in the field at the 2015 RBC Canadian Open at Glen Abbey Golf Club.

“The reason I came here was to win and I was trying to get into the RBC Canadian Open,” Rank said. “Anytime you can win a national championship is a huge honour and I’m glad I pulled it out.”

The Elmira, Ont. native carded rounds of 73-70-69-72 to finish the championship at 4-under 284. His win adds to the list of successes the Team Canada National Amateur Squad program has amassed this season.

“The boys [Team Canada] have been playing really well, we’ve got a lot of trophies to the Golf Canada and Team Canada name in the last couple of years and it’s nice to just add another one my behalf,” he continued.

In the Mid-Master division, second round leader Darren Shaw narrowly missed a spot in the playoff for the overall title after a final round 2-under 70 that left him in solo third. The Stoney Creek, Ont. native ran away with the Mid-Master division finishing seven strokes ahead of Dwight Reinhart of Renfrew, Ont. at 2-under 286.

Complete scoring and results can found online by clicking here.