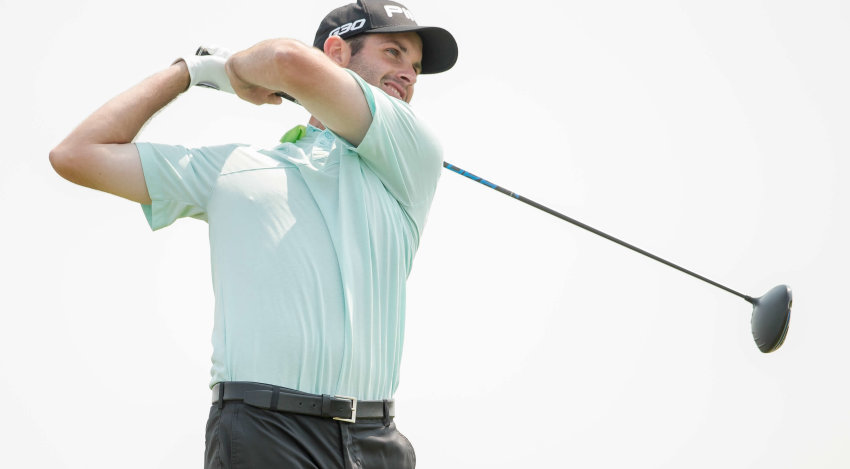 SASKATOON, Sask. – Bear, Delaware’s Eric Onesi shot a 5-under 67 on Saturday at Dakota Dunes Golf Links to build a four stroke lead heading into the final round of the SIGA Dakota Dunes Open presented by SaskTel, the fourth event of the Mackenzie Tour – PGA TOUR Canada season.

The 27-year old reached 19-under through 54 holes to lead by four over Pitt Meadows, British Columbia’s Justin Shin and by five over five other players and will look for his first Mackenzie Tour win on Sunday.

“It gives me a lot of confidence,” said Onesi of his 67 on a windy Saturday, where gusts in excess of 25 km/h made for tricky scoring conditions. “I didn’t try to go after anything and used a little more club here and there. I made some nice smooth swings and the ball reacted great most of the time.”

The 27-year old, who earned medalist honours at the British Columbia Qualifying Tournament earlier this year, added one more birdie for good measure at the 18th hole on Saturday by knocking an 8-iron from 165 yards inside 10 feet and rolling in the putt.

“I picked a nice line and it was a little closer than I thought it would be,” said Onesi of his approach. “To make that putt, especially in front of a whole lot of people, that gives me a lot of confidence.”

With one round to go, the Old Dominion University grad knows the field will be chasing him on Sunday, but said he felt comfortable with a simple approach to the final round.

“I don’t even know what the lead is, but I know I can only control myself and I know I control my own destiny,” said Onesi, who added that he has drawn confidence from his Q-School this week at Dakota Dunes. “I did it at Q-School, so I always tell myself ‘you’ve done it, just keep sticking to your gameplan.’ There are great players out here and they’re going to make birdies, but if I can make some birdies too, I’ll be a couple of shots better.”

Shin, who is making his first Mackenzie Tour start of the year on a sponsor’s exemption, fired a bogey-free 66 to hold solo second through three rounds. The 23-year old earned his first professional win earlier this year on the PGA TOUR China Series at the UI Real Estate Wuhan Open and currently ranks fourth on that Tour’s money list.

One shot back of Shin at 14-under were Chris Williams, Ross Beal, Ryan Brehm and Ben Silverman, who lost in a playoff at last week’s Syncrude Boreal Open presented by AECON.

Team Canada Young Pro Mackenzie Hughes signed for a round of 68 to get to 12-under for the tournament and tied for 15th place. Fellow teammate Corey Conners also shot 68 today while Albin Choi posted a round of 71.