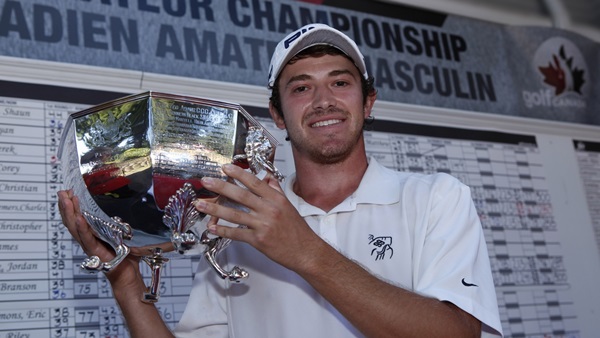 After a back and forth day at Royal Colwood Golf Club, Eli Cole tapped in for par on the 18th green to capture the 109th Canadian Men’s Amateur Championship.

Cole, 23, of Beverly Hills, Calif., entered the final round in a three-way tie for the lead alongside, Ricardo Celia, 21, of Colombia and Corey Conners, 21, of Listowel, Ont.

On Friday, the championship came down to the final hole at Royal Colwood Golf Club after Cole and Conners both hit the 18th green in regulation tied at 6-under par. Cole cozied his 15ft birdie putt up to the hole and tapped in for a regulation par only to watch Team Canada’s Conners three-putt from outside 50ft for bogey to hand Cole the Canadian Men’s Amateur title.

“I never thought Corey was going to three putt, he’s just such a classy player and he’s so good,” Cole said. “I was lucky to play with him the last few days, he was just a great guy all the way around yesterday and today, start to finish.”

As a graduate of Texas Christian University, Cole recently recovered from a double fracture of the tibia and fibula – An injury that left him sidelined from golf from nearly a year.

“It’s been a long road and if I said I did it by myself I’d be lying, so many people have helped me along the way,” he stated. “I’m really lucky to have come in contact with the people I have and everyone associated with TCU has just been incredible and everyone over in Canada this week have been so friendly.”

Cole carded an even-par 70 to finish at 6-under 276 for the championship to earn the coveted exemption into the 2014 RBC Canadian Open at Royal Montreal Golf Club and also a spot into next week’s 2013 U.S. Amateur.

“One of my goals is obviously to play on the PGA TOUR and now I’m about 1-millionth of the way there playing in the event,” he stated. “I have to stay healthy knowing my history but I couldn’t be more excited, I absolutely love it up here in Canada.”

Finishing in a tie for second one-stroke behind Cole at 5-under par 277 were Team Canada’s Corey Conners and Taylor Pendrith, 22, of Richmond Hill, Ont. Conners carded three birdies on his back nine to post a 1-over 71, while Pendrith thrilled fans holing out from 179 yards for eagle from the middle of the 18th fairway to post a 2-under 68 final round.

Colombia’s Celia, finished in solo fourth at 4-under 278 after a final round 2-over 72, while Team Canada Development Squad member, Adam Svensson, 19, of Surrey, B.C., finished in solo fifth at 3-under 279 after 4-under 66 on Friday.