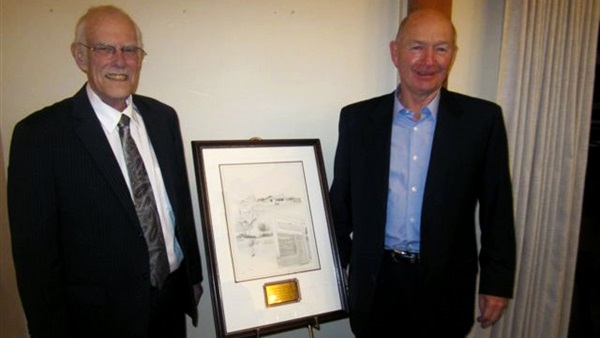 Last month, Westfield Golf and Country Club in Grand Bay-Westfield, N.B. honoured Doug Campbell as the eighth member inducted into the Westfield Wall of Fame. Doug has been a great ambassador for his club as a long-time volunteer and through all the friendships that golf has brought him at the club.

To be eligible for this honour a member must have participated in club activities, provincial and national events, and demonstrated great sportsmanship serving as a role model and mentor to fellow members at Westfield. Over the years Doug has easily met all the requirements, having made Westfield a big part of his life. As part of his volunteer days in golf Doug served his provincial golf association culminating as president of The New Brunswick Golf Association in 1973-74. He also served as non-playing captain for the 1974 N.B. Willington Cup Team at the Canadian Amateur.

Doug Campbell is still described by friends as a competitive player who gives his best effort on every shot. He understands that golf is a game and a little wager is always a welcome addition with friends. As a competitor Doug sites his victory in the 1986 St. Croix Invitational as one of his golf career highlights. He also has shared his love of the game with his family who is very proud of him and this latest accomplishment. His wife Jane took up the game in recent years. Sons Andrew and David were introduced to the game by their father. David has made a career in the golf industry as the Executive Director of the Nova Scotia Golf Association.

On behalf of Golf Canada, congratulations Doug Campbell on this fine honour by your club. Thank you for your service to the game of golf and your passion as a player. We wish you a healthy winter season and many more great years down the middle of the fine fairways at Westfield Golf and Country Club.