A different view of the green 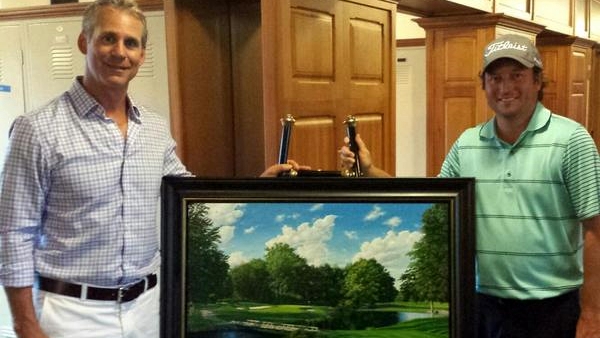 The RBC Canadian Open means something different to everyone. To some, it’s an opportunity to introduce their children to the game, to others, it offers motivation to perfect their swing. Tony Harris, however, looks at the national championship a little differently.

As the official artist of the RBC Canadian Open, Harris recreates some of Canada’s most renowned courses on canvas. A golfer himself, he insists on producing imagery that appeals to both the artistically inclined and the golf enthusiast.

“If I’m commissioned to do a painting of a golf course I want to find the hole that shows the character of the entire course,” Harris said of his passion for painting courses. “If it’s going to be one hole, I’m hoping to really display the character of the entire 18 hole experience. Even as a non-artist looking at a golf painting, you’d be able to see if you’ve played St. George’s 18th hole [because] you’d know you’re about 200 yards out and you’re going to have to hit a soft fade to that back right pin if you want to get it close. That’s what I try to do for the golfer, not necessarily as an artist, but I always want that picture to make sense to the golf purist who understands and knows golf.”

Producing these pieces is not a simple task, and usually takes longer than most golf tournaments themselves. Harris noted that most pieces take him between 50 – 80 hours to complete, and this is after the initial photography of the golf course.

“I work from photograph. I take pictures and I’ll often do some sketchwork from the course.I’m usually there for the entire day so the light can fall at different times,” he continued. “Unless I’m absolutely sure of what hole to paint, I’ll generally spend time between two different holes to give myself some options. I’ll travel between the holes, do sketches, and take lots of pictures early in the morning.”

“I could paint Augusta National forever,” he said. “I’ve done four different paintings of No. 12 from so many different spots; it’s just one of those things that will just never get old.Even though it’s the same every year, every year there’s always a different time of day that makes the hole look different.”

Harris has not only mastered the art of golf landscapes, but maintains an extensive collection of sports portraits as well. Having painted some of the NHL’s biggest names including Henrik Sedin and Mike Fischer, as the world evolves into one based on instant digital photography, it is refreshing to watch Harris continue to capture the action and emotion of professional sports on canvas.