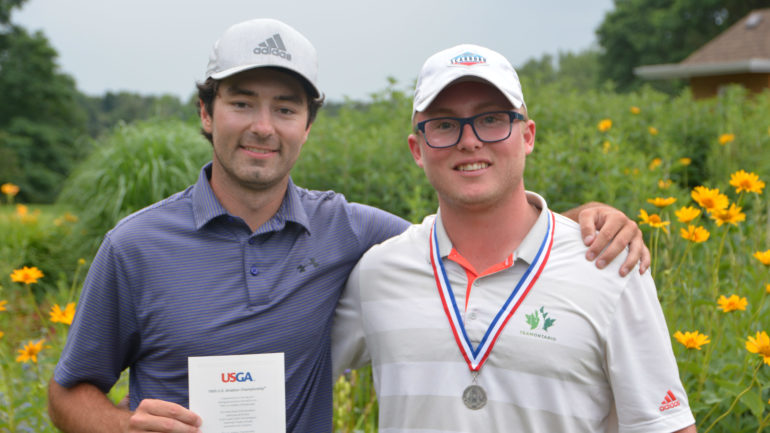 THORNHILL, Ont. – Cougar Collins of Toronto and Jackson Bowery of London, Ont., earned exemptions into the 2019 U.S. Amateur Championship at the Qualifier held at The Thornhill Club in Thornhill, Ont., on Monday.

Collins earned medallist honours by carding rounds of 69 and 67 during the 36-hole competition. The 20-year-old clinched the exemption with an eagle on the par-5 No. 17 during his second round.

“I had my dad on the bag today and it means a lot to both of us that we’ll be able to go back to the U.S. Am,” said Collins. “I came into the day wanting to be committed to every shot I hit. When it came to the back nine today, the two par-5s were really the turning points.”

Collins is entering his junior season at Eastern Michigan University and advanced to sectional qualifying for the 2019 U.S. Open. He played the U.S. Amateur in 2018, failing to make the cut.

A playoff was needed to determine the second automatic exemption, with Bowery and Team Canada National Amateur Squad member Josh Whalen (Napanee, Ont.) finishing at 5 under. Bowery won with a par on the second playoff hole (the par-4 No. 18) after Whalen lipped out his putt to save par.

Bowery will be playing the U.S. Amateur Championship for the first time. He finished runner-up at the 2019 Canadian University/College Championship.

It was a breathtaking turnaround for Whalen, who looked out of contention at 2 over following the first round. A 7-under-par-64 in his second round – the lowest round of the day – earned him the playoff with Bowery.

Whalen earns the first alternate spot from the Qualifier. Garrett Rank of Elmira, Ont., earned the second alternate spot. Rank and Zack Mason (Toronto) finished at 4 under and Rank clinched the spot with a par on the sixth playoff hole (the 18th).

Monday’s qualifier was one of 96 being held across North America from July 1-24 and the only such qualifier in Canada.

The 119th U.S. Amateur Championship is being held at Pinehurst Resort & Country Club in Pinehurst, N.C., from August 12-18.