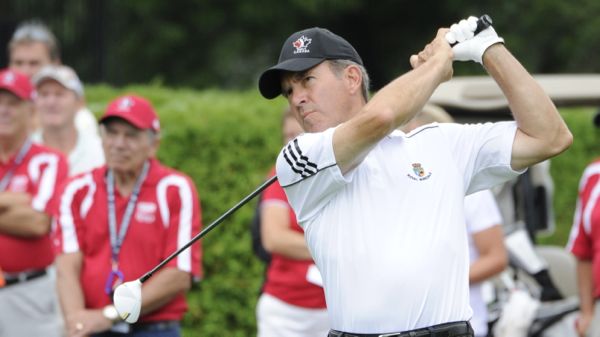 Chip Lutz continued his solid play on Canadian soil, posting a 2-under 69 at the Canadian Men’s Senior Championship at The Briars Golf Club.

Lutz, the defending champion, got off to a good start on Wednesday carding two birdies over his first seven holes but said a few three-putts got in the way of a round that should have been better.

“I three-putted No. 17, which was disappointing but turned and birdied No. 3 to get back to 2-under,” Lutz said. “It looked like I might get some momentum going but I failed to birdie No. 4 like yesterday and three-putted again on No. 7.”

Despite a few hiccups with his putter, the Reading, Pa., native rolled in a crucial birdie on the par-5 9th after a nice approach from the greenside bunker to break free of a tie with Calgary’s David Schultz.

“That really helped to have a little more of a positive feel after finishing an average day that felt like it was going to be better but never materialized,” the two-time defending champion said.

With 36-holes remaining, the No. 6 ranked player in Golfweek’s Senior Amateur rankings sits at 6-under 136 and has a chance at becoming only the third player to capture the Canadian Senior Men’s Amateur Championship three years in a row.

“I’m just happy to play my game and see where it falls,” he said. “I only hope to be close at the end and that I’ll have a chance coming down the stretch.”

Schultz trails Lutz by a single stroke after posting a 2-under 69 on Wednesday. The Calgary native carded five birdies during his second round and will be paired with Lutz in the last group tomorrow.

“I’m going to go have fun, chase him and see what happens,” Schultz said. “I’m looking forward to it.”

Howard Broun of Calgary carded the round of the day at The Briars after a 4-under 67. Broun currently sits three strokes off the lead in third, while Americans Duke Delcher of Bluffton, S.C., and Jay Blumenfeld of Parsippany, N.J., sit in a tie for fourth at 2-under par.

In the Inter-Provincial Team Championship, the Team Alberta contingent of Howard Broun of Calgary, Floyd Kilgore of Grimshaw, Alta., and Frank Van Dornick of Camrose, Alta., fired a 4-under 138 to capture their second straight Phil Farley trophy with a 2-under 282 total.  The squad finished seven strokes ahead of overnight leader Team British Columbia who carded a final round 6-over 148.

In the battle for the Super Senior title (70+), Robert Fugere of Gatineau, Que., defeated Walt Martin of Oakton, Va., on the third sudden-death playoff hole after they finished the day tied at 6-over for the championship. Fugere, the Canadian Senior Men’s Champion in 2005, sank a short birdie putt on the par-4 10th hole to earn his first Super Senior title.