Canadians Hearn, Hadwin tied for eighth through 18 at Bay Hill 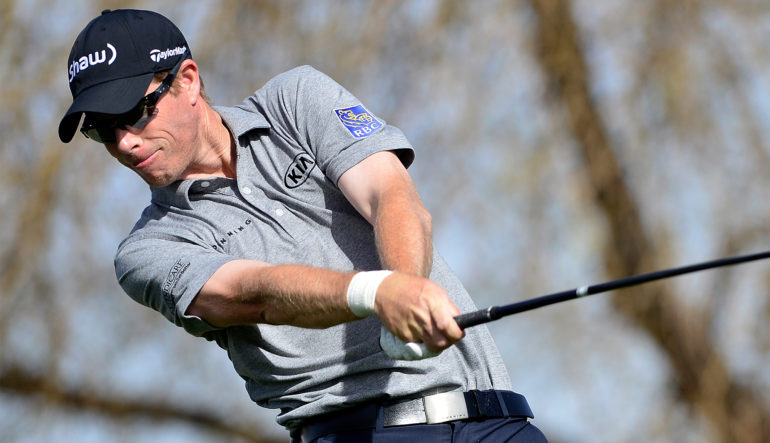 ORLANDO, Fla. – Emiliano Grillo of Argentina recovered from a rough start in cold weather by running off seven birdies for a 5-under 67, giving him an early three-shot lead in the first Arnold Palmer Invitational without the beloved tournament host.

Multi-colored umbrellas, Palmer’s logo, were everywhere at Bay Hill on Thursday. Parkas would have been more appropriate on this day. It was 39 degrees when the first round began, the coldest start to any PGA Tour event this year – in Florida, no less.

Grillo three-putted from 25 feet on No. 3 and took a bogey from 120 yards out in the fairway on the par-5 fourth. It never got any worse.

“If I had my hands out of my pockets for a minute or two, I would be freezing,” Grillo said. “But I was able to keep it in the fairway mostly all day and I was able to make a few good putts on 9 and 17, and that kept me going.”

Defending champion Jason Day, Francesco Molinari, Stewart Cink and Kevin Kisner were at 70. Only five other players broke par from the morning tee times, though the temperatures warmed in the afternoon on a perfectly manicured course – particularly the greens – at Bay Hill.

The Canadian pair of Adam Hadwin (Abbotsford, B.C.) and David Hearn (Brantford, Ont.) were also at 70 (-2), sharing a 12-way tie of eighth. Hadwin is coming off a whirlwind week after collecting his first win on Tour – he had one of the day’s best rounds going but ran into trouble on the par-4 18th with a double-bogey.

Sam Saunders, Palmer’s grandson, played in the afternoon. Although he does not have full PGA Tour status (he received an exemption) and has never won on tour, he was placed in a marquee group with Rory McIlroy and Brandt Snedeker in a week of celebration for Palmer, who died Sept. 25.

Saunders received an ovation when he walked onto the first tee and gave a quick thumbs-up, his grandfather’s trademark. He was announced as representing Bay Hill and received cheers that rivaled what Tiger Woods once heard when he was ruling at Bay Hill.

From there, it felt like the Arnold Palmer Invitational of old, with a few noticeable differences.

Most players had the umbrella somewhere visible: the collar of a shirt, the hat, the bag or the covers on their drivers and fairway metals. The 13-foot bronze statue of Palmer was positioned behind the first tee and on the way to the 10th tee. No one could miss that.

And his cart was stationed to the right of the 16th tee, pointed the opposite direction across the water toward the 18th green. That’s where Palmer loved to watch golf.

“I think everyone is a little bit more emotional this year because, obviously, the passing of Mr. Palmer,” Day said. “We’re so used to seeing him around on the driving range, in the clubhouse, interacting with players, interacting with fans. Unfortunately, we don’t get to see that anymore.”

The biggest distraction was the chill in the air, even as the sun rose over the course.

Grillo had 175 yards left for his second shot on the opening hole. He hit a 5-iron and it barely made it into the front bunker. Charl Schwartzel estimated he was hitting his driver some 30 yards shorter than usual.

“Just a big, big difference between the morning and this afternoon,” he said.

Molinari reached 4 under through 11 holes, but played the final seven holes in 2 over, failing to birdie either of the par 5s.

John Daly, playing on a sponsor exemption, was briefly on the leaderboard until a double bogey on the 18th hole (he started on No. 10). That was still five shots better than when he played the hole in 2006 and made an 11.