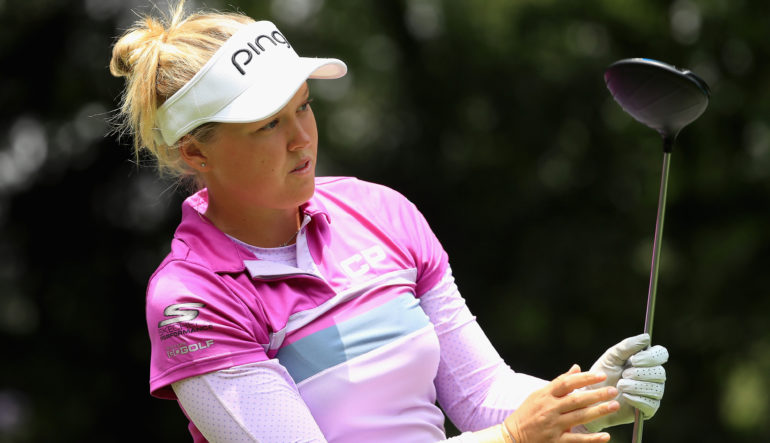 The results have not been coming quite as quickly for Brooke Henderson in her second year on the LPGA Tour.

Henderson has two top-10 finishes through 10 events this season – by no means a sophomore slump, but well behind her pace of eight top-10 results through nine events as a rising rookie last year. However, the confident 19-year-old from Smiths Falls, Ont., believes a breakout will happen soon.

“It’s been a little disappointing, some of the results, but I feel like my game is extremely close,” Henderson said Tuesday at an Ottawa-area charity golf tournament while making a rare visit home. “It’s just one or two shots every week.”

“I’m really excited about the upcoming tournaments and hopefully I can switch the momentum and finish near the top.”

Henderson’s best finish has been a tie for fourth and the HSBC Women’s Champions in Singapore earlier this year. She finished tied for 14th at the ANA Inspiration, the first major on the LPGA Tour schedule in late March. She has her sights set on the other four majors on the calendar, including the KPMG Women’s Championship, where she will be the defending champion.

She played the most out of anyone on the LPGA Tour last year and said she has been able to apply that learning. She admitted she will take two weeks off later this summer to make sure her “focus and mental strength is where it needs to be.”

“Playing all the courses last year, this year I knew where to hit it. I knew where the good spots and the bad spots were, even in the hotels I felt more comfortable and the surroundings.” she said. “Every golf course I see, everywhere I go and get to do `more’ it makes me feel better for this year, and for years to come.”

She said she’s particularly looking forward to the CP Women’s Open in August at the Ottawa Hunt and Golf Club. Henderson was recently bestowed an honorary membership to that club, which last hosted the Women’s Open in 2008.

She knows it will be a pressure-packed week.

“There are going to be a lot of expectations for sure, and I don’t want to disappoint. I want to give them a good show.”

But the pressure, she said, is something she’s starting to relish.

“I do think there are a lot of expectations on me, but I love pressure and I think it’s just what you make of it,” she said.

And despite more than US$2 million in earnings in her career, rolling up to the course in a new BMW SUV, and just having procured a home in Naples, Fla., Henderson remains a teenager at heart.

She said she’s binge-watches the show White Collar on Netflix, follows her hometown Ottawa Senators during their Stanley Cup playoff run, has a penchant for Disney films and is a big texter away from the golf course.

“It’s nothing too crazy,” she said. “Just a typical teenager.”

Henderson will take the rest of this week off, staying in her hometown of Smiths Falls visiting with family and friends  – she has not been back since Christmas – before going to Williamsburg, Va., for the next event on the LPGA Tour schedule.

“I love being home, even though it’s like December here, it’s so cold,” she said. “I’m excited to get back playing again next week in Virginia, and hopefully have some great finishes.”