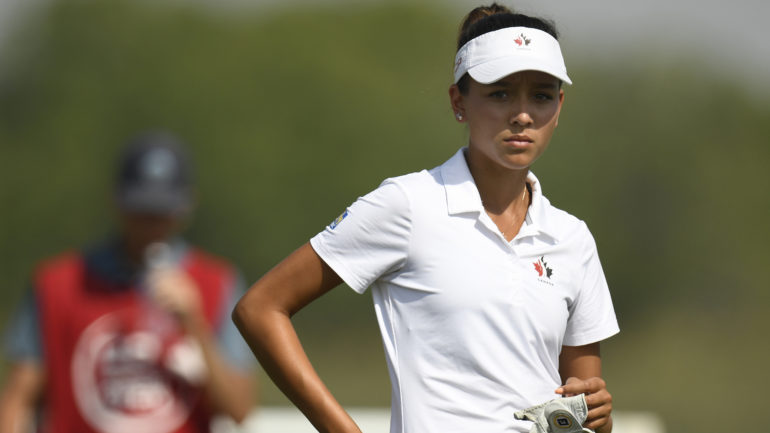 It’s been a summer of learning for Céleste Dao, and she hasn’t even been in school.

Dao, of Notre-Dame-de-l’Île-Perrot, Québec (about 40 minutes from Montréal) has played golf this year in Japan, Mexico, and Ireland – to name a few, she’ll be heading to Argentina later this year, too – but she’s most looking forward to heading back to Canada.

Dao will be playing her third World Junior Girls Championship this fall at Camelot Golf and Country Club  – 20 minutes from downtown Ottawa – and she says it’s the most fun experience she’s had. Although golf is such an individualistic game, she relishes the chance to represent her country and play as a group.

“I love team events,” she says. “It’s good to have different kinds of tournaments so we can see different pressure and different parts of our game. I’m really looking forward to that.”

Dao was also given an exemption into the CP Women’s Open in Regina, Sask. where she said her goal was to make the cut (she finished T140 at 8 over par).

Her win at the Mexican Junior Girls Championship in May – she won in a playoff after being six shots back of the lead going into the final round – gave her the momentum she needed to qualify for the U.S. Women’s Open later that month. She says her experience from the major (she shot 83-80 to miss the cut, but did get in a practice round with both Brooke Henderson and Alena Sharp) is going to be helpful as she tees it up in Canada’s national championship.

“I can manage my stress and now I know what it looks like. Before, I never knew. Now I have a little clue. I think I’m going to be better,” she says.

This is Dao’s first year on Team Canada after a tremendous 2017 campaign that saw her notch six victories across a wide spectrum of events including the Québec Women’s Amateur and the Québec Junior Girls.

She started to play golf when she was three years old, after her father showed her. She started hitting balls in her garage off a mat, and then got more serious a few years later – starting to play tournaments at age eight.

She says she loves the whole experience of being a part of Team Canada, but especially the travel.

The week before the CP Women’s Open Dao was in Northern Ireland playing the Girls’ British Open Amateur Championship (she was eliminated in the second round of match play), and she’ll represent Canada at the Youth Olympics in Buenos Aires in October.

Her favourite country, she says, has been Japan. But she says she started to enjoy Ireland the more she got to explore. “It’ll be a tie,” she says with a laugh.

Dao is eager to don the red-and-white at an event, the World Junior Girls Championship, she’s thoroughly enjoyed the last three years.

“I really enjoy that tournament. We play against so many international teams and we always have fun with the girls,” she explains. “I think we’re going to do great.”