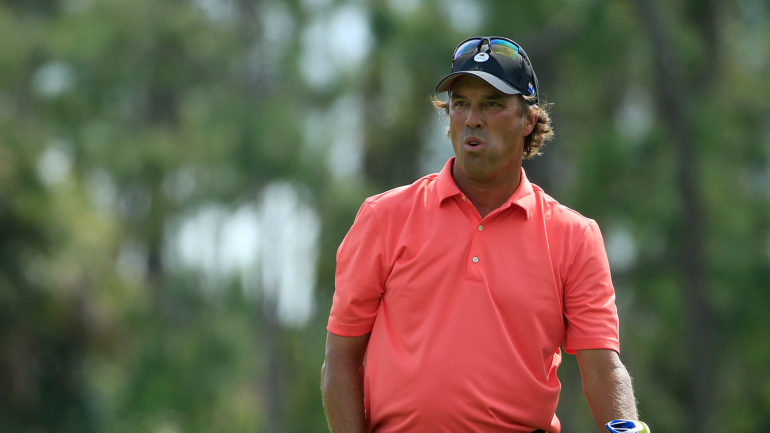 NAPLES, Fla. – Ken Tanigawa had six back-nine birdies in a 5-under 66 for a share of the Chubb Classic lead Saturday with Glen Day and Stephen Ames.

“I never felt all that comfortable early on and it kind of showed,” Tanigawa said. “I kind of hung in there, then I made those two bogeys on 8 and 9, which was easy to do. I made a nice putt on 10 to make a birdie and just tried to stay patient and plug away. I started hitting better shots and making some putts and got some momentum my way.”

He won the PURE Insurance Championship in September at Pebble Beach for his lone PGA Tour Champions title.

Day birdied the final two holes for a 66.

“I made a double on th–e front nine,” Day said. “Other than that, everything was real solid. You’re going to get a lot of birdie opportunities out here, so you’ve got to stay patient.”

Ames, tied for the first-round lead with Sandy Lyle after a then-course record 63, had a 68 to keep a share of the top spot at 11-under 131.

“I’m quite happy to be in the position I’m in,” Ames said. “Tomorrow’s another day.”

Kevin Sutherland broke the day-old course record with a 62, birdieing six of his first eight holes in a round that started on No. 10.

“I hit it better than I did yesterday and got in a rhythm early and I putted well,” Sutherland said. “I made all the putts I needed to make and made a couple that probably were a gift.”

Tour newcomer Retief Goosen (65) and Steve Stricker (66) topped the group at 9 under.

“I’ve been giving myself some opportunities around here the first couple of days and just not getting it in there, not knocking ’em in,” Stricker said. “I’ll hit good putts, a lot of misreads. I’ll hit a few bad putts. I’m just struggling on getting it in the hole.”