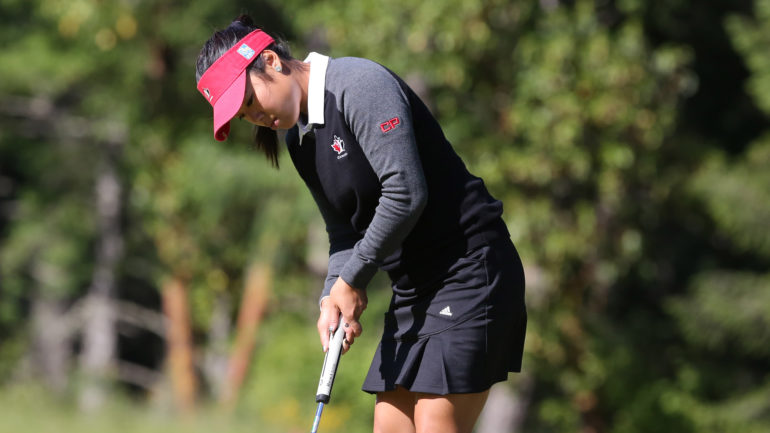 PINEHURST, N.C. – The rain-delayed third round didn’t seem to cause Canadian LPGA hopeful skip a beat on Satuday as the duo picked up right where they left off.

Team Canada National Amateur team athlete Jaclyn Lee has strung together three consistent rounds (68-70-70) to sit at 8 under par, three off the pace. Lee, a senior at Ohio State, had an up-and-down round that featured an eagle and three birdies against three consecutive bogeys. The Calgary native is one of 11 amateurs in the field this week at Pinehurst Resort.

Fellow countrywoman Anne-Catherine Tanguay had similar fortunes in the third round. The Quebec City native posted six birdies on the day before giving three strokes back with a triple-bogey on her final hole of the day. The 24-year-old holds a share of 5th place at 3 under par.

One of @ACTanguay’s six birdies on the day at LPGA #QSeries. The #TeamCanada Young Pro Squad member sits T5 through 3 rounds 🇨🇦🇨🇦 pic.twitter.com/J5S4EDALM6

Maude-Aimée LeBlanc of Sherbrooke, Que., continues her fight to get into contention. She currently sits well back in a tie for T59 at 7 over par.

The field will be 102 players and there will be approximately 45 spots up for grabs for the 2019 season.