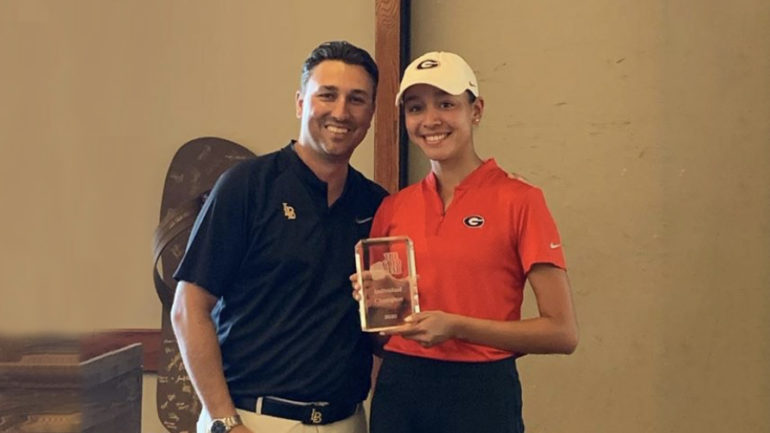 She proved him right this week.

Dao, from Notre-Dame-de-L’Ile-Perrot, Que., won the Gold Rush golf tournament on Tuesday, finishing 7-under 209, a shot better than teammate Caterina Don. The Bulldogs placed three players in the NCAA event’s top four to run away with the team title, besting second-place Fresno State by 23 strokes.

Playing a shotgun start, Dao’s coaches and teammates first had to track her down on the course at the Old Ranch Country Club in Seal Beach, Calif., to tell her she had won and led the team to victory. Once Dao’s teammates had chased her down they all hugged to celebrate her first collegiate win.

“I think it says a lot about Celeste that when she was giving her victory speech she congratulated her team just 30 seconds into her speech on winning the team title,” Brewer said. “I’m just lucky as a coach to have an individual who is able to step back and say ‘what wonderful teammates I have.’

Striking a pose for that first collegiate win 👊🏼🇨🇦

“That’s why the reaction was the way it was when she had won and she gave it right back to them.”

Dao, a graduate of Team Canada’s National Junior Squad, was named the SEC Freshman of the Week for women’s golf on Wednesday following the victory.

It’s the same sort of class that impressed Brewer when he first met Dao.

She had already won the Quebec Women’s Amateur title in 2017, and then the Mexican Junior Girls Championship and the Canadian Junior Girls Championship in 2018 when she and her family dropped in on Brewer at the University of Georgia’s campus in Athens. They spent 90 minutes together before parting company and then Brewer attended a nearby junior tournament Dao was competing in.

Brewer had already planned to attend the event for recruiting purposes and to support some of his student-athletes but followed Dao for a few holes.

She struggled in the first round of that event but then bounced back with rounds in the high 60s. That piqued Brewer’s interest.

“We both had good first impressions and the relationship just grew from there,” Brewer said. “She’s very upbeat, positive. Just works hard as far her golf game and is wanting to play professional golf, which we want.

“We want people who have big dreams and she wants to be the next Brooke Henderson, write her own chapter in women’s golf for Canada.”

Dao, an 18-year-old freshman, got better each round at the Gold Rush this week, shooting a 71-70-68. Brigitte Thibault of Rosemere, Que., who was named the 2019 female amateur of the year by the Golf Journalists Association of Canada, was 14th for Fresno State.

Brewer was impressed with Dao’s poise at the Gold Rush, holding on to her second-round lead.

“I would be fibbing if I didn’t say I didn’t know how she would respond. First time in that position, on a collegiate level,” Brewer said. “I think she handled the atmosphere well.

“It’s hard to close when you’re leading. I know she battled to the end and it was a tough one-shot victory. But again, winning in this sport is always to make par too when you’re coming down the stretch and you have a lead but she found a way to do it.”