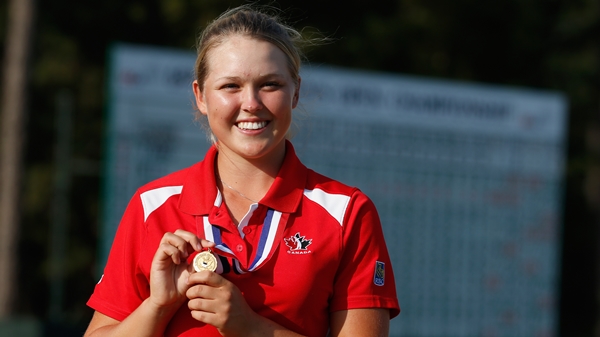 PINEHURST, N.C. – There’s no doubting Team Canada’s Brooke Henderson knows how to rise to the occasion.

She’s won major amateur events like the Porter Cup and the Spirit Invitational. She’s the youngest golfer ever to win a professional golf title. And now, in perhaps her biggest feat to date, the 16-year-old Smiths Falls, Ont. native captured low amateur honours at the 2014 U.S. Women’s Open at Pinehurst No. 2 – where she finished tied for 10th at 5-over 285 on the devious track.

“There’s a lot of great amateurs here that qualified this week,” said Henderson following her round Sunday in North Carolina. “It’s very exciting, that’s for sure. The best players in the world are here and to know that I’m right up there, it’s really awesome. I still have a long way to go to where I want to be in the next couple years, but it’s really exciting to know that I have the potential and it was a great finish here this week.”

Henderson, who had her sister Brittany as her caddie this week, improved on the tie for 59th she recorded in her first Women’s U.S. Open last year at Southampton, N.Y. She credited her ball striking in the final round for part of the improvement.

“Ball striking was really big for me today,” she added. “I made two mistakes off the tee which cost me a double and a bogey, but other than that, I was hitting it really well and had a couple tap-in birdies, which is really nice.”

She had five birdies, two bogeys and a double on Sunday to be exact for a 69, her lowest round of the week. A round she likely didn’t see coming a week ago.

“When I first got here I was like, wow, this is an extremely tough course and it’s going to take four really solid rounds to even make the cut and then to climb up the leaderboard like I did,” Henderson admitted. “But I was almost intimidated the first couple days and then as I got playing and I started to hit the ball really well, I knew where to hit it on the fairways and where to hit it on the greens and I became much more confident. And today, right now, I sort of wish there was another round to go back out there, but I’ll have to wait until next year.”

Thanks to her finish at Pinehurst, Henderson automatically qualifies for the 2015 U.S Women’s Open being contested at Lancaster Country Club in Lancaster, Pa.

Henderson outlasted the world’s top women’s amateur golfer in Australia’s Minjee Lee, who finished 3-shots back of Henderson at 8-over 288, to claim the low amateur title.

“Well, Minjee is an amazing player,” explained Henderson. “She’s ranked No. 1 in the world as amateurs and she’s been at a lot of pro events and she always plays really well. Coming in that (winning low amateur) wasn’t necessarily my goal, but it’s nice that it happened.”

Brooke and Brittany will have little time to relish in the moment. The pair headed north Sunday evening as they will face off against each other, and others, at the Canadian Women’s Tour event at Legends on the Niagara’s Battlefield Course in Niagara Falls, Ont. which gets underway Tuesday. For more details on that event – which offers an exemption into the 2014 Canadian Pacific Women’s Open – and the Canadian Women’s Tour, click here.

And, click here to watch an interview with Brooke following her final round at the 2014 U.S. Women’s Open.