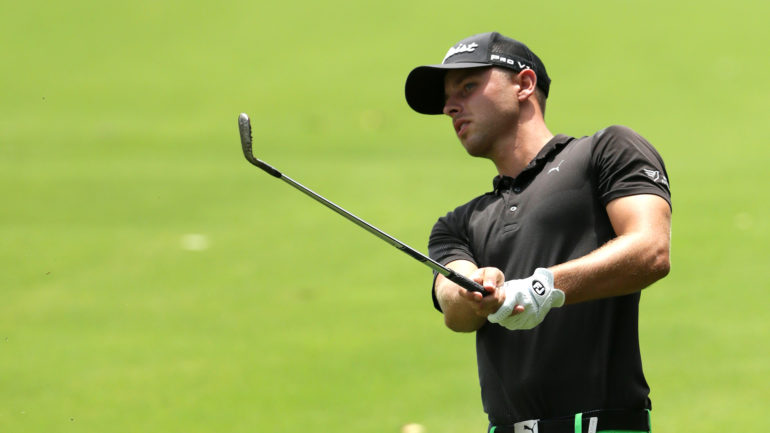 GREENSBORO, N.C. – Canada’s Adam Svensson made a run at golf’s magic number before settling for a 9-under 61 on Friday at the Wyndham Championship.

The 59 watch was on after the 25-year-old golfer from Surrey, B.C., made seven birdies for a 28 on the front nine at a soft and wet Sedgefield Country Club. But Svensson cooled down with two birdies on the back nine, preventing him from becoming just the 10th player in PGA Tour history to shoot 59.

“I was kind of like, all right, I’m 9 under par (after No. 13) and there’s still four or five holes and a par 5,” Svensson said. “I was actually pretty calm. I thought I would be a little more nervous than I was.”

Svensson was tied with Canadian Mackenzie Hughes and four others in third place heading into the weekend at 11 under – two strokes behind leader Byeong Hun An.

An was at 13-under 127 halfway through the PGA Tour’s final event before the FedEx Cup playoffs. Brice Garnett was a stroke back after a 64.

Adam Hadwin of Abbotsford, B.C., was the lone Canadian to shoot 59 on the PGA Tour, doing so in 2017 at the CareerBuilder Challenge.

“I was happy with the way I played. I had a couple missed putts coming down the stretch,” he said.

He needs to go 2 under in his final 4 holes @WyndhamChamp pic.twitter.com/HSYPd0n8EZ

Hughes, from Dundas, Ont., shot 66 after opening with a 63 to stay in contention entering the third round.

The 61 came at a great time for Svensson, a PGA Tour rookie. He sat 171st in the FedEx Cup standings entering the Wyndham Championship, the final event before the playoffs.

The top 125 qualify for the playoffs and guarantee themselves PGA Tour cards for next season. If Svensson does not reach the top 125, he’ll have to go to the Korn Ferry Tour Finals to try to maintain his status on the top tour.

“I was talking to Danny (Sahl), my caddie, who said, ‘You know what? Go out and just no pressure, just go out there and play and see what we can do,”’ Svensson said.

Svensson also shot a 61 in January in the first round of the Sony Open in Hawaii. He is the only player this season to shoot multiple rounds of 61 or better.

An made his move up the leaderboard with three straight birdies late in his round.

Finishing on the back nine, the 27-year-old South Korean who’s winless on tour had birdies on Nos. 3-5 and closed his second consecutive bogey-free round with four straight pars.

“I came close last couple years and, you know, maybe this week might do it,” An said about that long-awaited first victory. “But still have two more days and there are a lot of players behind me. … Just do what I’ve been doing the last couple days and just hit a lot of fairways and greens and make some putts. If someone plays better than me, then he deserves to win it, but as long as I keep these bogey-free rounds going.”