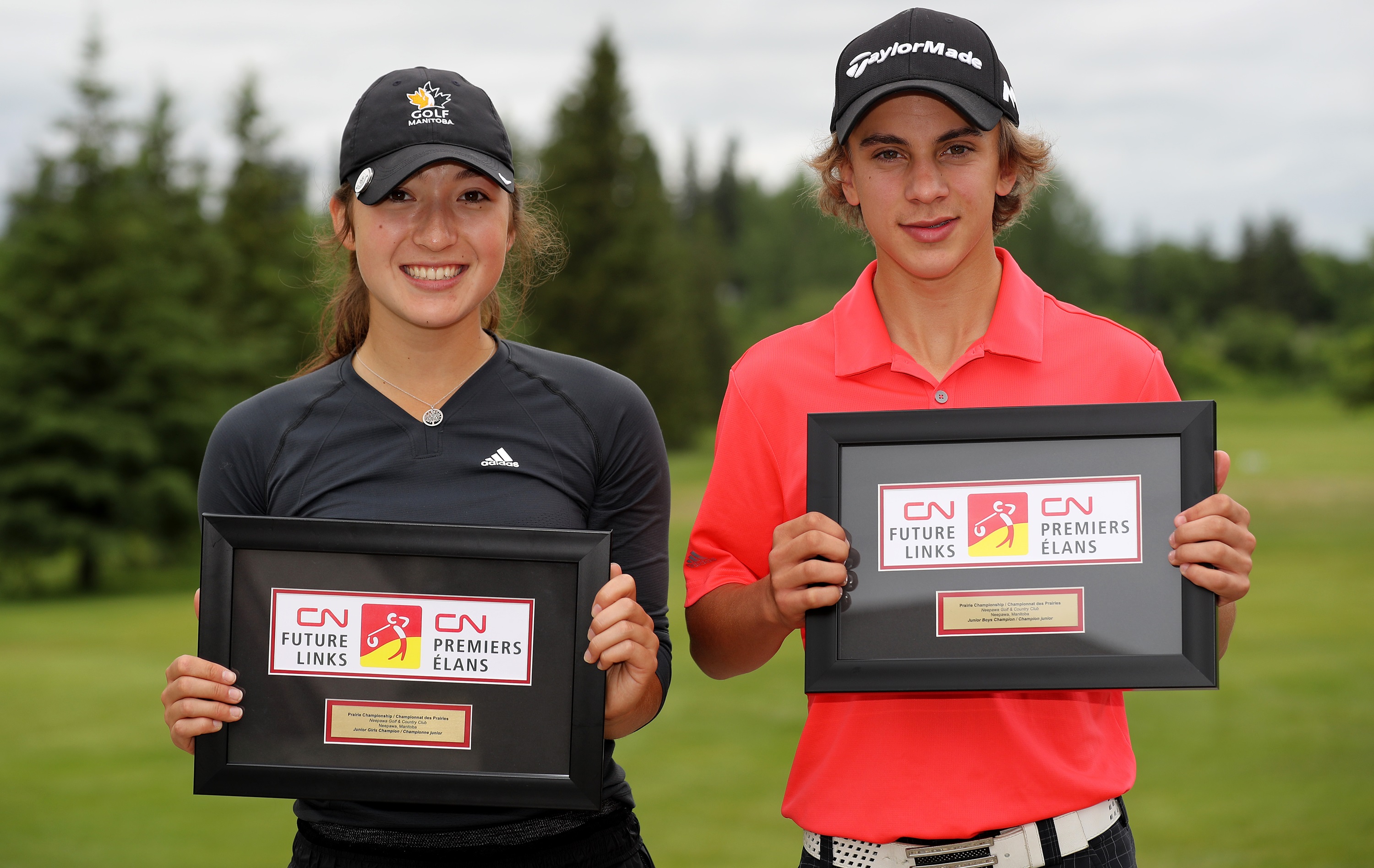 NEEPAWA, Man. – Following a 90-minute delay due to lightning, the final round of the 2016 CN Future Links Prairie Championship got underway beneath overcast skies at Neepawa Golf & Country Club. Camryn Roadley and Peyton Callens played through the difficult conditions to each claim two-stroke victories and the titles of Junior Girls and Junior Boys champions.

Back-to-back birdies on holes 4 and 5 gave Winnipeg’s Roadley an early push ahead of weekend-leader Shirin Anjarwalla. The 17-year-old carded a 2-over 74 which included three birdies and seven consecutive pars to begin the back nine.

Anjarwalla of Nanaimo, B.C., entered the day having held the 18- and 36-hole leads. The 16-year-old was unable to hold off the advances of Roadley and finished in second at 13-over 229.

Roadley was excited to see the growth in her game since her first foray into the CN Future Links Championships at the 2012 edition of this event. “One of my first tournaments was the Prairie Future Links where I came last. To now actually be at the top is a nice change.”

Julie (Younsoo) Ju of West Vancouver, B.C., held onto third-place for a second straight day after matching Roadley’s 2-over performance.

All competitors within the Top-6, including ties, in the Junior Girls Division have earned exemptions into the Canadian Junior Girls Championship at The Links at Penn Hills in Shubenacadie, N.S., August 2-5. Roadley, Anjarwalla, and Ju will be joined by Bobbi Uhl (Erickson, Man.), Kate (Dahye) Choi (Surrey, B.C.), and Rebecca Kuik (Winnipeg).

Peyton Callens of Langton, Ont., came into the final round sporting a four-stroke lead over Victoria’s Keaton Gudz. The pair would play out a seesaw affair throughout the day, but a six-birdie, even-par showing would secure Callens the victory.

“Throughout the week, I thought I played very well,” said the 16-year-old who finished 4-under 212. “Keaton and I were battling all day. After the first two holes we were already tied, so after that point, I just had to focus on me.”

Callens’s sights are now set on the challenge of competing at the national championship. “I missed the cut for the Canadian Junior Boys last year, so I’m going to practice and play every day. I’ll continue playing tournaments along the way to keep my competition level up.”

Winnipeg’s Marco Trstenjak tallied six birdies, including four across a bogey-free back nine, to climb into third-place. The 16-year-old’s 4-under 68 tied for the low-round in the competition. CN Future Links Quebec champion Callum Davison claimed fourth.

With the day’s result, Callens, Gudz, Trstenjak, and Davison have all gained entry into the 2016 Canadian Junior Boys Championship at Clovelly Golf Club in St. John’s N.L., from August 1-4. Keenan Flemming and Ryan McMillan prevailed in a two-hole playoff to break a three-way tie for fifth and earn the final two exemptions.

Additional information regarding the 2016 CN Future Links Prairie Championship can be found here.