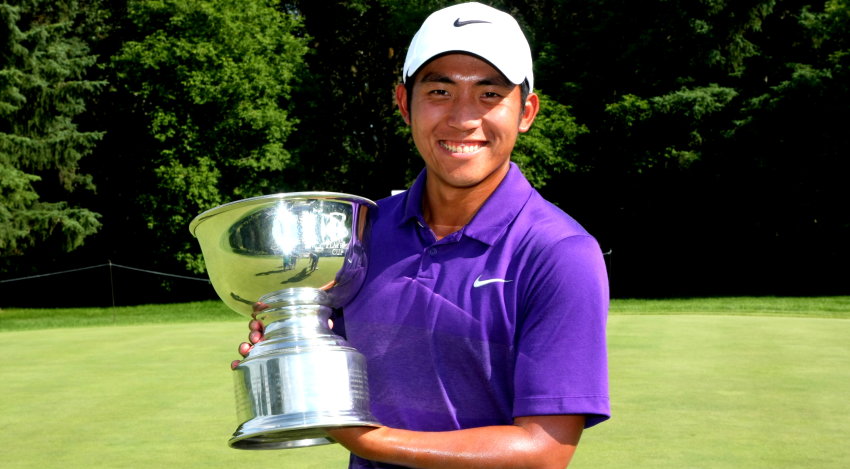 Winnipeg, Man. – In just his fourth start as a professional, Taiwan’s C.T. Pan claimed his first Mackenzie Tour – PGA TOUR Canada victory at The Players Cup, carding a 5-under 66 on Friday at Pine Ridge Golf Club to win by two over Sweden’s Robert Karlsson.

The 23-year old, who recently finished a standout collegiate career at the University of Washington that saw him named an All-American four times and a finalist for the Ben Hogan Award in 2015, produced a bogey-free 31 on the final nine holes for a 5-under 66 and the two stroke victory.

“This something I’ve always dreamed of. I didn’t expect it so soon, but I guess it happened and it’s awesome. I’m beyond happiness,” said Pan.

Starting the day three shots off the lead held by Newport Beach, California’s J.J. Spaun, Pan made the turn at 1-under, then rattled off birdies at the 12th and 14th holes to take over the solo lead. Karlsson and Spaun would both tie Pan at 13-under briefly on the back nine, but the Mackenzie Tour rookie closed like a veteran with birdies on the 16th and 17th to post 15-under par in the clubhouse. Neither Karlsson nor Spaun could match him, giving Pan the Players Cup title.

Pan’s birdie at the 17th was especially strong, with the pin cut over a ridge in a spot Pan admitted he labelled ‘un-approachable’ in his yardage book. After safely finding the green, he drained a 40-footer for his fourth birdie in six holes, giving him a two-shot cushion.

“I wanted to make it, but I did not expect it to drop. I wanted to give it a shot and I hit it pretty hard – it turns out it dropped, I guess,” Pan said with a smile.

Pan, who erased a three-shot defeicit, becomes the fourth player in five events to come from behind to win on the Mackenzie Tour this season.

“I knew if there was a guy to be worried about, it was going to be him, to be honest,” said 54-hole leader Spaun, who carded a 1-over 72. “I knew he was in a good position starting the day because he wasn’t that far back but he was far enough back to not really care what happens to him. Good credit to him, he’s a good player.”

“Nick Taylor, Brock Mackenzie, a lot of [University of Washington] alumni that were here after their collegiate life showed me this is the way to do it, and I just followed their path,” said Pan. “I want to be one of them and I want to compete on the PGA TOUR. I just want to thank them for showing me this path.”

Pan made his professional debut earlier this year at the U.S. Open, where he finished T64. He also played on the PGA TOUR the following week at the Travelers Championship and finished T25.

Hughes becomes the third member of Team Freedom, which is composed of fellow players Taylor Pendrith, Albin Choi, Adam Svensson and Matt Hill, to win the award this season, joining Pendrith and Choi.