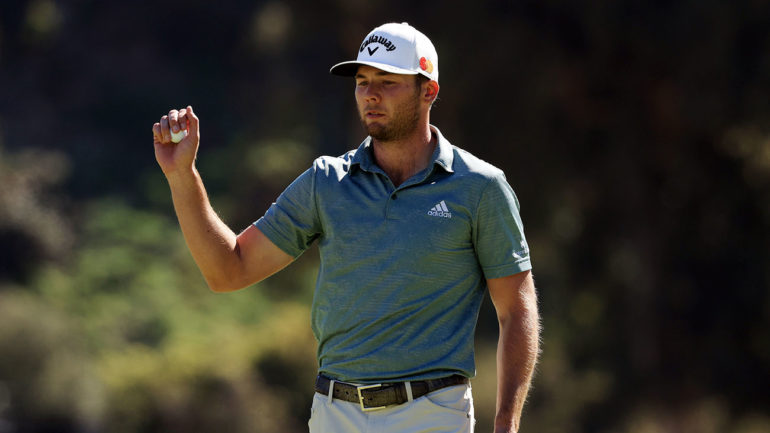 LOS ANGELES — Sam Burns made two big par putts Sunday morning in the Genesis Invitational to finish a 3-over 74 for a two-shot lead on what turned out to be the toughest weekend round at Riviera since the PGA Tour started keeping such records.

Burns had a two-shot lead over Dustin Johnson, Matt Fitzpatrick and Max Homa.

The third round had to be completed ahead of the final round because of wind so strong it halted play Saturday for four hours and made Riviera, a tough test in normal weather, feel like a U.S. Open.

The average score was 73.34, the highest ever for a third or fourth round at Riviera. Fitzpatrick was among only three players who managed to break 70. His 69 matched the low score, and it included a bogey on the final hole.

Johnson, who won at Riviera in 2017 and loves the course so much he named his son River after it, began his day by making a 20-foot par putt with about 2 feet of break on the 14th hole. He made pars the rest of the way for a 71.

Burns had a five-shot lead at the start of the third round and at one point went 31 consecutive holes without a bogey. That streak was never going to last, and it ended on the eighth hole. He was still leading by five when he bogeyed the 12th and 13th holes, the last two he played Saturday evening when it became too dark to continue.

He promptly three-putted for bogey on the par-3 14th, leaving his 40-foot birdie putt some 8 feet short. Conditions were so firm, and extra quick with the crisp morning breeze, that it was tough to control the distance in the air and on the ground.

On the next hole, Burns was just short of the green and left his putt 12 feet short. In danger of slipping into a share of the lead, he holed the par putt. Fitzpatrick fell back with a bogey on the 18th, and Burns kept his two-shot margin by making a par putt from just inside 10 feet.

That left the final round Sunday afternoon up in the breezy air. Ten players were separated by four shots, a group that included Patrick Cantlay (71) and Tony Finau (70).

Jordan Spieth had a 73 and was five shots behind.

Burns, a 24-year-old from Louisiana, is going for his first PGA Tour victory. This is the second time this season Burns has held the 54-hole lead. He shot a 2-over 72 in the Houston Open and tied for seventh.