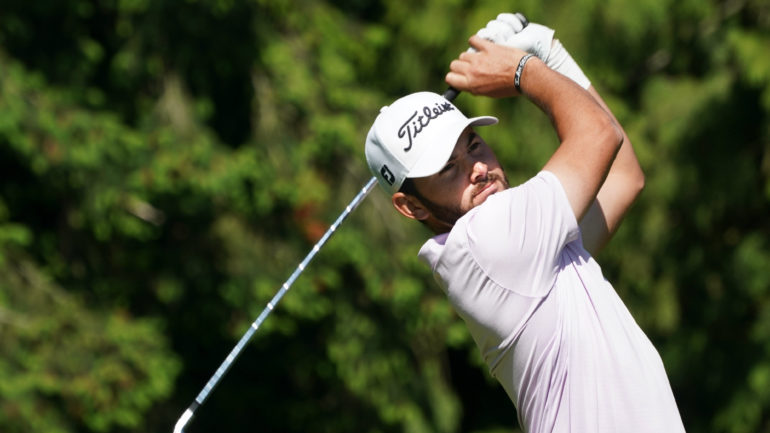 CALGARY — Conditions were tough and low scores were few and far between during the third round of the ATB Financial Open–unless your name is Hayden Buckley.

Firing a 64 that bettered the next-best score by two strokes, the University of Missouri alum made eight birdies to back up two weekday 66s to start the tournament at Country Hills Golf Club.

“The score was more than I could ask for. It was a day where every putt seemed to go in,” said the first-year pro. “The putter saved me. It wasn’t a great ball-striking day by any means.”

Following a bogey on the first hole after a wayward tee shot, Buckley made back-to-back, 12-foot birdie looks on the next two holes to quickly get himself back into red figures for the day.

“With it being cold and windy, it’s always tough, but I managed to find a few more (birdies) on the front,” said Buckley, who made two more, on Nos. 6 and 7, to grab the lead. “No. 8 was definitely my turning point.”

After pulling his drive into the fairway bunker for the second time of the week, Buckley topped his next shot and left it in the bunker.

“I’m sitting there about 115 yards out from the back pin and almost flew it in the hole,” said Buckley, who has four top-10s this season in eight starts. “[The ball] ended up 10 feet away, and I made it for par, so it was close to a double bogey that could have thrown me off; to make a par and go to the back nine was huge.”

Pushing his tee shot on No. 10, a mammoth par 4 playing into the wind, Buckley managed to hit a 4-iron from 245 yards, playing downhill, to 10 feet, which he again poured in.

“Those were a few strokes that really changed everything,” said Buckley. “It was a grind the rest of the day because the backside is so tough, and I didn’t hit it well enough to make birdie until the last three holes.”

Making three downhill birdie putts on his final three holes, Buckley separated himself from the field and heads into the final round of an event with the lead for the first time in his Mackenzie Tour career.

“It’s been awhile since I’ve had a win,” said Buckley, who was named the University of Missouri Male Athlete of the Year during his 2017-18 school year. “I had a few in college and none since, so it’s been a long time. At the end of the day, it’s about playing a round of golf, and if I win, I win, and if not, I’ll go to the next week and keep trying.”

“If you don’t finish in the top spots in a tournament you get lapped by a lot of guys,” said the 23-year old. “It’s pretty top heavy, but I know if I can win here then I can win a lot of places.”

Trailing Buckley is Sam Fidone, at 14-under, while Zach Zaback, at 13-under, will be the third player in the final group Sunday as players will tee off in threesomes in the morning to avoid a forecasted afternoon thundershower. The final group is slated to tee off at 9:20.

Seven Canadians head into the final round within the top 20 on the leaderboard. Taylor Pendrith battled back from two bogeys in his first three holes on Saturday to post an even-par 71 and is the low Canadian, in a tie for fifth.

Pendrith is in search of his fourth consecutive Canada Life Canadian Player of the Week award, while Stuart Macdonald, Wil Bateman, James Love, Wes Heffernan, James Allenby and Riley Wheeldon are all within the top 20.