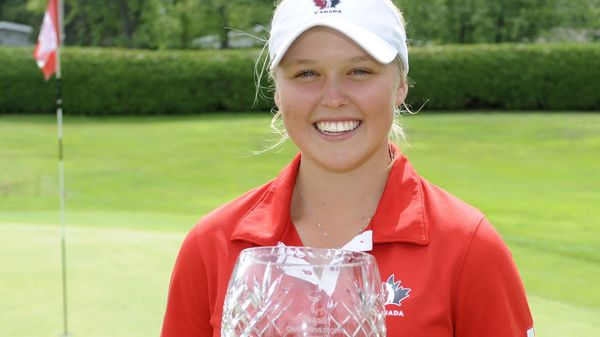 After a four-day back and forth battle with Anne-Catherine Tanguay, 22, of Quebec City, Henderson,15, carded the best round of the championship after firing a 5-under 66 on Friday. As the 15th ranked amateur in the world, Henderson finished at 9-under (69-70-70-66), six strokes ahead of Tanguay who stumbled on the back nine with three straight bogeys.

“It was just a fun day overall,” said Henderson. “I have a lot of high expectations for myself and I played up to them today.”

Overnight leader, Tanguay finished in second place at 3-under 281 after a final round 2-over 73. Henderson and Tanguay have known each for quite some time, as Tanguay used to golf with Brooke’s older sister Brittany and is a former member of Team Canada.

“It’s amazing to see how far she has come,” said Tanguay. “She used to be a little kid running around on the course and now she is just a young prodigy. Amazing.”

In the Mid-Amateur division (25+ years), Christina Proteau, 30, of Port Alberni, B.C., successfully defended her title winning her third consecutive Mid-Amateur division title. Proteau carded a 4-over-75 in her final round to finish at 16-over 300 for the tournament, seven strokes ahead of runner-up Stefi Markovich, 38, of Welland, Ont. Helene Chartrand, 56, of Pincourt, Que., took home the Mid-Master division title (40+) with a final score of 27-over 311, three strokes ahead of Leanne Richardson, 49, of Indian Mountain, N.B.