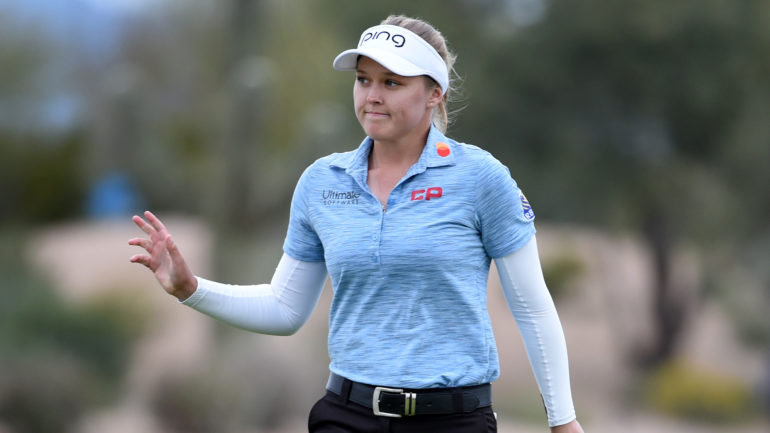 “Personally, I like the difficult course better than the easy course,” Park said through a translator.

The top-ranked Park shot her second straight 6-under 66 on Friday at the Founders Cup for a share of the lead with Yu Liu in the event that honours the 13 women who founded the LPGA Tour.

Coming off a victory three weeks ago in Singapore, Park birdied five of the first six holes on her final nine in perfect conditions at Desert Ridge. She lost the outright lead with a closing bogey on the par-4 ninth.

The 25-year-old South Korean has six victories in her first three years on the tour, winning majors in far more testing conditions at the 2017 U.S. Women’s Open and 2018 Women’s PGA Championship.

“I don’t expect this to happen every day,” Liu said. “When a day like this comes, I just am glad I was able to take advantage of it.”

“Definitely being the first off, the greatest advantage is pure greens and calm conditions,” Liu said.

Former Arizona State player Linnea Strom lost a share of the lead with a closing double bogey. With Arizona State’s players and coaching staff following her, she pulled her approach from the middle of the 18th fairway into a plugged lie in the face of the left bunker. The Swedish rookie took two shots to get out of the bunker, with the second racing through the green and almost into the exit tunnel under the grandstand. She got up-and-down from there for a 65.

“A bit unlucky on the last hole, but overall very happy with my round,” said Strom, a member of the Sun Devils’ 2017 NCAA championship team. “It was so much fun to play out there with my whole team supporting. This is like home for me to be here.”

“Obviously, the golf course is known to have some low scores,” Ko said. “You just have to go out there, try to play your game, and maybe play a little bit more aggressive than any other golfcourse.”

Boutier eagled the par-5 15th – holing out from a greenside bunker after hitting a drive that bounced off a cart path and went 340 yards – to tie Park for the lead at 13 under, but dropped three strokes on the final three holes. The 5-foot Frenchwoman, the Vic Open winner last month in Australia for her first LPGA Tour title, bogeyed the par-4 16th and had a double bogey on the par-4 18th.

“She’s one of my closest friends out here,” Boutier said. “We played on the Symetra Tour two years ago together, we graduated together and then last year we had a pretty good rookie year on the LPGA Tour together.”

Na Yeon Choi followed her opening 65 with a 71 to reach 8 under. She’s playing her first event after an 11-month layoff because of a back injury.

The projected cut line was 2-under par.