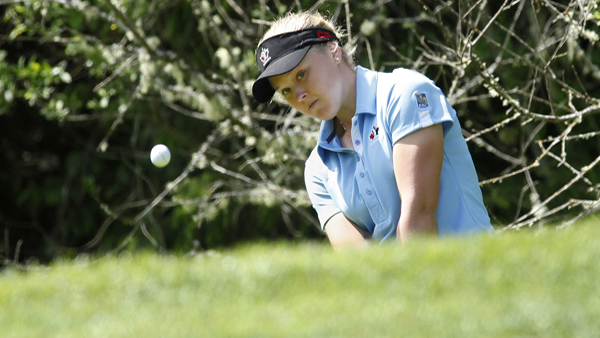 Niagara Falls, Ont. – On a windy day at Legends on the Niagara’s Battlefield Course Team Canada’s Brooke Henderson and Stephanie Connelly of Fleming Island, Fla. overcame tough conditions by firing 3-under 69’s to sit atop the leaderboard at the Canadian Women’s Tour Ontario stop.

Henderson, 16, of Smiths Falls, Ont. arrived in Niagara Falls fresh off of a T10 finish at the U.S. Women’s Open where she took home Low Amateur honours. On Tuesday, she continued her strong play by carding a bogey-free 3-under 69 that was highlighted by an eagle on the par-5 11th and an opening 3-under 33 front-nine.

“I started my second hole with an eagle on the par-5 so that sort of got things going,” Henderson said. “The back nine was a little bit rough, I didn’t make any birdies, just all pars.”

Sharing first place alongside Henderson is Connelly, who carded four birdies to close out her back nine.

“I started out really consistent, I was making a lot of pars,” Connelly said. “I haven’t played in a Canadian LPGA event in a couple of years, but I would love to play in the Canadian Pacific Women’s Open.”

Behind Henderson and Connelly, amateur Simin Feng, 19, of Windermere, Fla. and Emma de Groot of Sydney, Australia are tied for third after 1-under 71’s. Defending champion Emily Childs of Alameda, Calif., sits tied for fifth alongside Montreal’s Sabrina Sapone, Mari Chun of Pearl City, Hawaii and Natalie Gleadall of Stratford, Ont., at 1-over par.