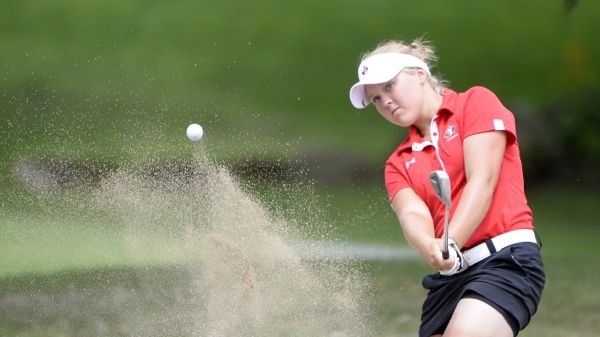 Brooke Henderson of Smiths Falls, Ont., and Gabriela Lopez of Mexico lead the 2013 Royale Cup Canadian Women’s Amateur Championship after the first round of competition at Club de golf Beloeil in Beloeil, Que.

After entering the clubhouse at 3-under 68 with a one-stroke lead, Henderson, 15, and her pairing were penalized one stroke for pace of play and joined Lopez at 2-under 69 and a share of the lead.

Henderson, a member of Team Canada’s National Squad and currently ranked at #15 in the World Amateur Golf Rankings has a history of success at Club de golf Beloeil. She took home the 2012 CN Canadian Women’s Tour Quebec title at the same course, her first professional tournament victory.

“Familiarity breeds confidence,” said Henderson’s coach Tristan Mullally. “She’s played well here before and that’s something we feed off of.”

Both Henderson and Lopez had four birdies and a bogey on a Tuesday that saw many players struggle with Club de golf Beloeil’s fast greens.

Henderson’s National Squad teammate Christine Wong of Richmond, B.C., finished in a tie for third with Vanessa Ha of Allen, Texas, Mariko Yamaguchi-Tumangan of San Jose, California, and Maribel Lopez of Columbia after they all shot 1-under 70 in their first rounds.

In the Mid-Amateur division (25+ years), Christina Proteau of Port Alberni, B.C., who has won the division the past two years, currently leads by one shot at 5-over par 76, while Helene Chartrand of Pincourt, Que is in second place at 6-over par 77. Chartrand leads the Mid-Master division (40+ years) by a single shot over Kim Carrington of Calgary, Alta.