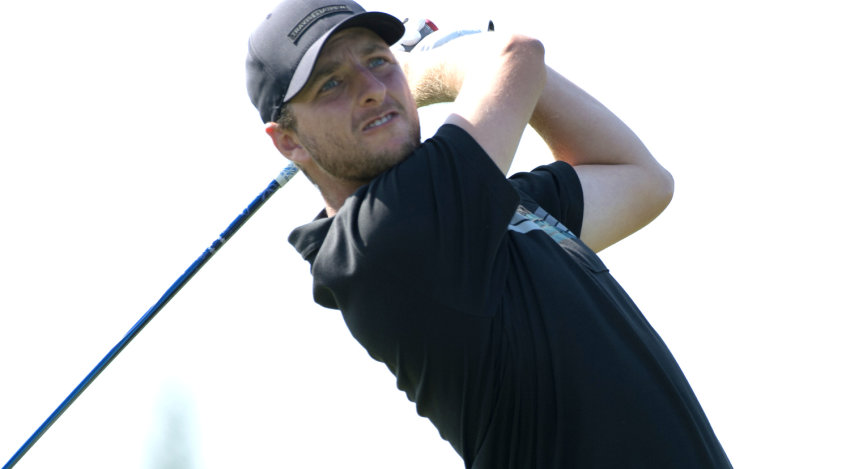 Chilliwack, British Columbia’s Brad Clapp took advantage of another perfect day for scoring at Loyalist Golf and Country Club on Friday, shooting a 9-under 63 to take the 36-hole lead at The Great Waterway Classic, the ninth event of the 2015 Mackenzie Tour – PGA TOUR Canada season.

Clapp, who was born in nearby Trenton, Ontario and spent the first 10 years of his life in southeastern Ontario, carded seven birdies and an eagle to reach 14-under par through two rounds, two shots clear of Taiwan’s C.T. Pan, Florida’s Chase Seiffert, Minnesota’s Clayton Rask and California’s Trevor Simsby.

“I just stayed out of trouble. I’ve been hitting my driver really well this week, so I hit it almost every hole on the back nine,” said Clapp. “I gave myself a lot of chances and only missed one green, so I’ve just been keeping it in play, plugging along and staying patient.”

The 28-year old, who tied the round of the week despite missing a one-footer for birdie on the 13th, is staying with his Aunt and Uncle nearby and said he enjoyed the hometown feel of the event with familiar faces following him in the crowd.

“I only get a chance to come out here and see my family on this side of the country once a year if I’m lucky, so it’s nice that we can have dinners together,” said Clapp. “I’m seeing some friends I haven’t seen in a long time, so it’s awesome. It keeps me nice and relaxed off the golf course.”

Clapp said the good vibes for the week started when he set the new course record during a casual round on the course he grew up playing as kid on Tuesday.

“My aunt and uncle operate the Trenton Golf Club where I first grew up playing, so I went back and played there on Tuesday. There’s a membership that usually comes out and follows me. Unfortunately I didn’t play very well last year, but I’ll hopefully have some more people out this week,” said Clapp.

Two shots behind Clapp was a group of four players that included Pan, the champion earlier this year at The Players Cup and current No. 9 on the Order of Merit, along with Rask, who finished third at last week’s National Capital Open to Support Our Troops, Web.com Tour member Trevor Simsby and Mackenzie Tour rookie Chase Seiffert.

“There’s only so much I can control. People might shoot 25-under and I might not win, but there’s nothing I can do about that. It’s hard, with people talking about it. When they announce you on the tee with your position on the Order of Merit, it’s hard not to think about it. When that happens, I go back to my basic stuff and just try to make sure my mindset is right and not setting my expectations too high.” – C.T. Pan on trying to block out thoughts of his position on the Order of Merit with four events left in the 2015 season.

“Last week was good. I was hitting it really well, but putting better than everything else helped me out a couple of holes early today. It’s good momentum to have going into the last stretch here.” – Clayton Rask, who finished third at last week’s National Capital Open to Support Our Troops.

“It’s funny; that year felt a lot different. This year I feel like even though I didn’t do anything at the beginning of the season, I was still playing pretty well. I was making some cuts and had some top 30s, and felt like I was closer than what the scores were indicating. I’ve certainly played better the last month or so. I think I’m playing so much better than I did in 2013, it’s just really hard to win out here and shoot four 65s, which is pretty much what you have to do.” – Mackenzie Hughes, who ranks 11th on the current Order of Merit, on comparing his game to the 2013 season, when he won the Order of Merit. Hughes shot 29 on the front nine Friday for a 6-under 66 and 11-under total.