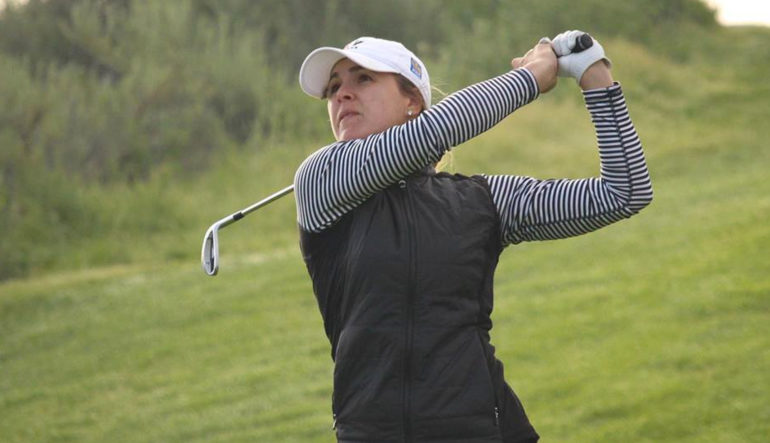 BEAUMONT, CALIFORNIA, March 26, 2017 – Daniela Darquea (Quito, Ecuador) holed out for eagle on the 13th and drained birdie on 18 to win the IOA Championship by three shots with a final-round 5-under, 67 on Sunday. She finished with a three-day total of 12-under, 204, the lowest winning score in the three years at Morongo Golf Club at Tukwet Canyon.

Darquea’s victory is historic as she becomes the first player in the history of the Symetra Tour or the LPGA from Ecuador to win.

“It’s such a special feeling knowing that kids in Ecuador can look up to someone and say ‘I can play golf and be successful’,” explained an emotional Darquea. “Golf is not a very popular sport in Ecuador so this is so special and really important to me.”

Darquea nets a first-place check of $15,000 and moves to second on the new Volvik Race for the Card

money list. Olivia Jordan-Higgins, who withdrew from the IOA Championship, remains in the top spot. Darquea has earned a total of $16,783 through two weeks.

Darquea, who entered the day in a share of the lead, made the turn at 2-under for the day and had a share of the lead early on the back nine. On the 13th hole, she holed out for eagle from 130 yards out in the fairway to grab a two shot lead.

“It is one of the toughest holes on the course and I was in the fairway and hit my 9-iron and the ball bounced on the front edge of the green and the second bounce hit the pin and went in,” explained Darquea. “I couldn’t see from where I was, but everyone on the green started screaming so it was really cool.”

Darquea made four straight pars and then stuck her approach on 18 to five feet and put an exclamation on the win with a birdie.

“I was nervous and my hands were shaking, but that is pretty much why I play golf,” said Darquea about the last putt. “Thank god the ball went in.”

Darquea earned partial LPGA status through Qualifying Tournament by finishing T29. She actually won Stage I of Q-School in the area at the Dinah Shore Courses in Rancho Mirage. She isn’t sure how many LPGA events she will play, but is thoroughly enjoying her time on the Symetra Tour.

“I didn’t really expect to win this quick,” said Darquea, who finished T17 at the season opener. “I just love to play golf and compete and I’m super about this.”

The Tour heads to Mesa, Arizona next week for the Gateway Classic at Longbow Golf Club. The event runs Thursday, March 30 through Sunday, April 1.

8-YEAR LPGA VET AND FORMER GRADUATE NEARLY COMES FROM BEHIND: Alison Walshe (Westford, Mass.) graduated from the Symetra Tour to the LPGA in 2009 and has been on the big tour for the last eight years. She struggled last year and plans to play some Symetra Tour to supplement the LPGA events she’s able to get in.

On Sunday, she put together a blistering 6-under, 66 to move from T19 to a tie for fourth. She actually moved into the lead midday through the day.

“The first few days, I was grinding it out because of my driving, I was really slicing it,” explained Walshe, who carded a 70-72 on the first two days. “I called my coach and a few people and I was like ‘any thought will help right now’ and I was able to sort it out and play more aggressive today.”

The perfect example came on the par-5 fourth. She sliced the ball in the bunker off the tee on Saturday and made bogey. On Sunday, she was on in two and made eagle.

“I hit my driver well and was able to reach the green in two today and was about 12-15 feet,” said Walshe. “I made a good putt there and that was big.”

Walshe has five career top 10 finishes on the LPGA Tour. She isn’t 100 percent sure how her schedule will align this year. She will play next week on the Symetra Tour at the Gateway Classic at Longbow Golf Club.

“I came into the beginning of the year trying to go to a couple Mondays (Monday Qualifiers) and see what my little bit of status will get me in (on the LPGA),” said Walshe. “I’m going to kind of go by feel. The last few years, I’ve kind of just played in everything and I kind of got sick of it and that is why I didn’t play well.”

Walshe recorded seven top 10 finishes in 2009 on the Symetra Tour.