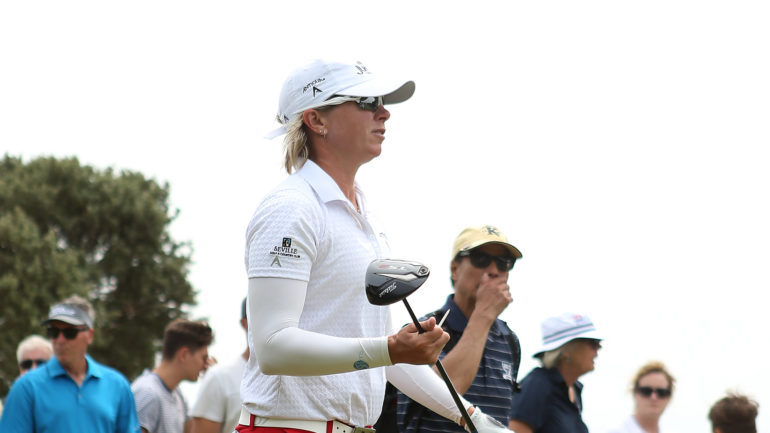 MELBOURNE, Australia – Korea’s Hee Young Park, who came close to quitting golf last year, made par on the fourth hole of a three-way playoff Sunday to win the LPGA Tour’s Victoria Open from compatriots Hye-Jin Choi and So Yeon Ryu.

On a course swept by a boisterous wind and as evening closed in Park, Choi and Ryu returned repeatedly to the tee on the dog-leg par-5 18th to play out a gripping finale after finishing tied at 281, 8-under par.

Former world No. 1 Ryu dropped out on the second playoff hole when she missed a birdie putt but Park and Choi continued until luck and nature intervened.

Choi’s tee shot on the fourth playoff hole came to rest against a pine cone in light rough left of the fairway, leaving her with no choice but to chip out. Her attempt to do so came up short, she put her next into a hazard, dropped out, and finally reached the fringe of the green in six.

Park had an eagle putt to win the tournament on the first playoff hole but saw it slide by the cup. She faced three more holes in tough conditions before clinching her third LPGA title.

“Last year was the worst year in my life and I had to go to q-school and I was going to stop golf because I thought (there was) no more game in my mind,” Park said. “Then I made q-school and I had a chance to play another year this year.

“I never stopped and I think God gave to me this present.”

Hamilton’s Alena Sharp started the final round in third, two strokes back from the leader but struggled through a 5-over 77 to tie for ninth. It marked the 14th top-10 finish of Sharp’s career on the LPGA Tour and her first of the season.

The tournament at the 13th Beach Golf Links also featured a European Tour men’s tournament running alongside the women’s event.

After Saturday’s third round, the men’s and women’s fields were reduced to 35 players each plus ties. The final round was played on the Beach course which was one of two courses used in the first two rounds along with the Creek course.

Australia’s Min Woo Lee held his nerve on a day of high winds and high drama to win his first professional title in the same tournament his sister Minjee Lee won as an amateur in 2014 and again as a professional in 2018.

Minjee Lee, who finished in a tie for sixth in the women’s event, was beside the 18th green when Min Woo tapped in a birdie putt to win the title by two shots from New Zealander Ryan Fox.

Lee, 21, began the final round three shots clear of three-time European Tour winner Marcus Fraser and fellow Australian Travis Smyth. But his main challenge came unexpectedly from Fox who carded an 8-under 64 in his final round to move to 17 under for the tournament and to place pressure on the lead.

Lee led by two shots at 19 under coming to the 17th but bogeyed and reached his final hole with only a one shot lead over Fox.

He didn’t falter. He found the fairway, then the green to leave himself a 12 foot birdie put which ended just inches wide of the hole and tapped in for a win which has been long anticipated.

“I just played awesome and I’m proud of myself,” Lee said after embracing his sister.

“I was walking off 14 and I heard a roar and I was guessing (Fox) or someone in that group had made eagle or birdie. I just counted up and figured he could have eagled 16 or birdied 17 and eagled 18.”

He was right. Fox birdied 16 and eagled 18 to complete his charge up the leaderboard.

Fraser shared third with Robin Sciot-Siegrist of France who shot 68 to finish 14-under.