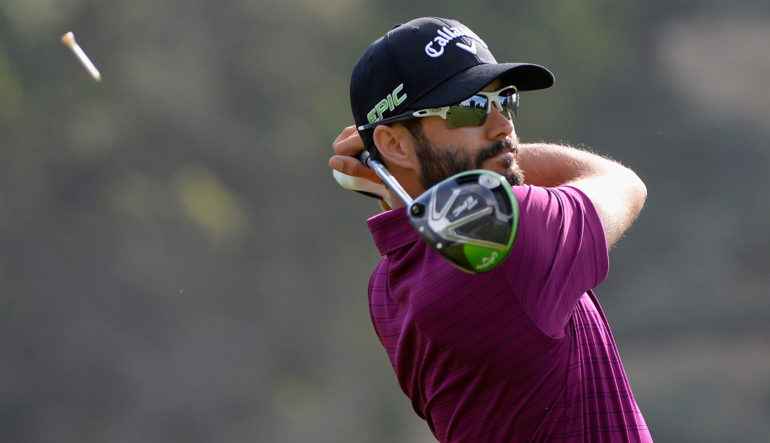 LOS ANGELES – This is the starring role Sam Saunders prefers.

Saunders, the grandson of Arnold Palmer who so famously kept his composure during a heartfelt eulogy of The King, rolled in birdie putts and kept a clean card at Riviera on Thursday for a 7-under 64 and an early two-shot lead in the Genesis Open.

Saunders called it his best round on the PGA Tour, and it was merely a coincidence that it came on the 50-year anniversary of Palmer defending his title at the Los Angeles Open, when it was played at Rancho Municipal.

“He just always talked about how much he loved coming out there and playing,” Saunders said. “I think his celebrity matched pretty well with the celebrity atmosphere that you have here, so he was obviously comfortable with that.”

Saunders had a two-shot lead over Dustin Johnson, who has a chance to go to No. 1 if he were to win this week. Daniel Summerhays, Cameron Percy, J.T. Poston and Brett Stegmaier joined Johnson at 66, while Phil Mickelson was among those at 67.

Adam Hadwin of Abbotsford, B.C., paced the Canadians with an opening-round 68 (-3) to hold a share of 18th. David Hearn of Brantford, Ont., was the only other Canadian to finish under-par, carding a 70 (-1) in Thursday’s opener.

Because of a fog delay in the morning, darkness kept 48 players from finishing the first round. They were to return 7 a.m. Friday, though the bigger question was whether a monster storm of rain and wind would allow for that.

Saunders has kept a busy schedule over the last four months in the aftermath of Palmer’s death. He is taking on a bigger role at the Arnold Palmer Invitational next month, along with being a husband and the father of two sons, and getting his golf game in shape.

Saunders was rock solid Oct. 3 when he stood before thousands at St. Vincent College, and so many more watching the live telecast of Palmer’s memorial service. Speaking without notes, Saunders beautifully captured the spirit of Palmer as a golfer and as a grandfather, saying that day, “There wasn’t a big difference between the man you saw on TV and the man we knew at home.”

He has always been known as Palmer’s grandson, and Saunders has learned to embrace it. He no longer worries about trying to make a name for himself.

“I don’t need to compete against my grandfather’s career. Nobody can,” he said. “I don’t care how many golf tournaments you win, nobody’s going to compete in the terms of doing what he did for the game. And for me to try to promote my own brand or name would be foolish because I have such a great opportunity to promote and to continue what he has already done. That’s what I’m going to do and not make it about myself.”

Saunders, with only conditional status this year, is playing on the first of what figures to be several sponsor exemptions. He missed the cut in La Quinta and Pebble Beach and knew with the forecast so dire that it would be key to getting off to a good start.

Johnson has come close to winning Riviera, one of his favourite courses, four of the last five years and he looked as though he might be tough to beat this week when he holed a 10-foot birdie putt on the 18th hole as he made the turn, going out in 32.

He failed to birdie the par-5 first hole when his approach was on the fringe on the wrong side of the green, forcing him to hit a flop shot to the other side. Worse yet, he was stung on the neck by a bee, and stood on the next tee rolling a cold water bottle against his neck as his brother and caddie, Austin, removed the stinger.

Johnson hit two ordinary shots, but followed with a pair of 25-foot birdie putts. A bogey on the fourth hole dropped him to 5 under, and he finished with pars.

Mickelson is playing his fifth straight event, though the 46-year-old sure didn’t seem bothered by that. He went eagle-birdie-birdie around the turn to briefly take the lead and settled for a 67.

Also at 68 was Billy Hurley III, surprised by a strong performance after writing a moving letter in The Players Tribune to his late father, who committed suicide. Others at 68 included Branden Grace, playing Riviera for the first time, and Padraig Harrington, who fears a shoulder injury might require surgery.