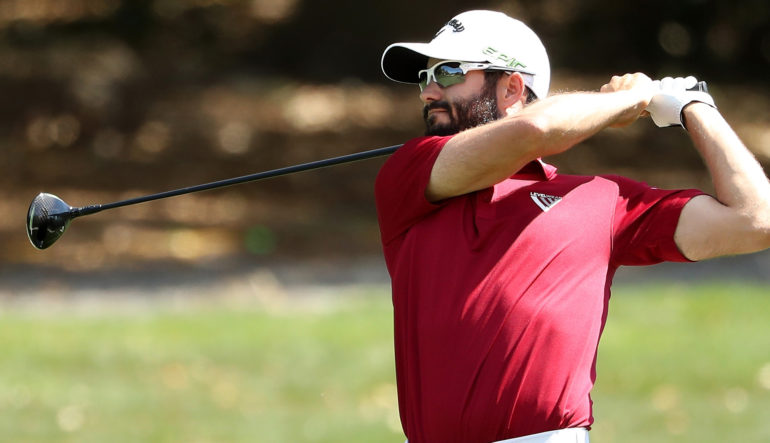 PALM HARBOR, Fla. – Canada’s Adam Hadwin only wants a chance to win when he tees it up on the PGA Tour, and he’s never had a chance like this one.

Birdie putts from 35 feet and 55 feet on the back nine Saturday at the Valspar Championship stretched his lead to four shots. Equally important to him was the slick, bending six-foot par putt on the final hole.

“Three shots is much easier to come back from than four shots is,” Hadwin said after a clean card of 4-under 67. “That extra shot could be everything tomorrow. That was a big putt for me, I think, mentally going into tomorrow.”

The 29-year-old from Abbotsford, B.C., overcame a brief bout of nerves on the practice range with a flawless day in a strong, warm breeze on the Copperhead Course at Innisbrook. That six-foot par putt made it 31 straight holes without a bogey, put him at 14-under 199 and gave him the four-shot lead over Patrick Cantlay.

It was the third time in the last four PGA Tour events the 54-hole leader was up by at least four shots, and all of them won comfortably – Jordan Spieth at Pebble Beach, Dustin Johnson at Riviera and Rickie Fowler at PGA National.

More than a big lead, there is not a lot of experience chasing Hadwin. Of the three players within six shots of him, only Jim Herman has experienced winning on the PGA Tour. Herman won the Shell Houston Open last year for his first victory. He had a 71 playing in the final group and fell five shots behind.

Hadwin also had a 54-hole lead in the CareerBuilder Challenge when he shot 59 in the third round. He closed with a 70 and was runner-up to Hudson Swafford. He started that final round with a one-shot lead over Bozzelli.

Four shots is a lot bigger than one, though Hadwin said it could work both ways. He knows enough about Innisbrook to realize it can disappear quickly.

“But the other side of things is that guys are going to have to shot a good score to catch you,” he said. “To go bogey-free today, I mean, I’d love to do that again tomorrow. I think somebody would have to play an extremely good round of golf to catch me. Make some pars and make guys come and get you.”

British Open champion Henrik Stenson never made a move and struggled again getting his distance right in the wind, allowing for only a few reasonable birdie chances. He had another 71 and was seven shots behind, along with J.J. Henry (67).

For Hadwin, life has never been better.

It was at Innisbrook a year ago that he broke his 7-iron against a tree in anger, a starting point to learn how to smile more and worry less about golf, which he believes has led to better scores.

Plus, he’s getting married in two weeks.

A victory, perhaps even second place alone, might be enough to get Hadwin into the Dell Match Play. He won’t be going either way because his wedding is Friday (March 26) of that week.

A victory would get him into the Masters. In that case, the honeymoon might be postponed.

For now, he’s only thinking about playing good golf on Sunday and forcing everyone to catch him on the toughest track in Florida (that doesn’t convert par 5s into par 4s).

Equally compelling is the guy Hadwin will see on the first tee Sunday.

Cantlay was the No. 1 amateur at UCLA who swept all the big awards as a sophomore, and then shot 60 in the Travelers Championship the week after he was low amateur in the U.S. Open at Congressional. He played four PGA Tour events in summer of 2011 and never finished out of the top 25.

But at Colonial in 2013 as a rookie, he felt back pain. Doctors eventually diagnosed it as a stress fracture, and it took two years for him to feel healthy again. Turns out that wasn’t his biggest setback. He was walking to dinner with Chris Roth, his best friend and his caddie, a year ago February when Roth was struck and killed by a car.

From such a dark period, Cantlay managed to get his head, his back and his game in shape.

He says he is the same person who had such big expectations as an amateur.

“A few more low, highs and lows,” Cantlay said. “Gave me a little different perspective. At the time things were rolling so good all the time, I guess I didn’t think they could go any other way. But life hit me in the face pretty quick. So it’s really nice to be here playing, feeling good, and playing well.”