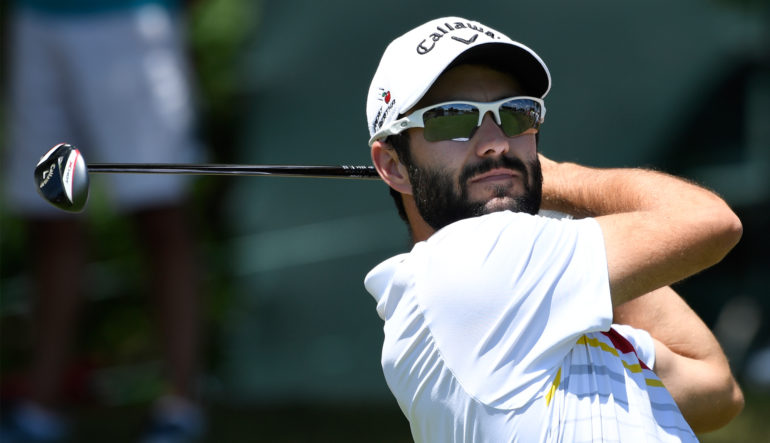 While it’s often said that hard work and dedication pays off, there’s another saying that closely correlates which suggests that patience is a virtue – and for 29-year-old Adam Hadwin, his breakthrough success this year on the PGA TOUR serves as a prime example.

After turning pro in 2009, Hadwin – who was born in Moose Jaw, Saskatchewan and raised in Abbotsford, British Columbia – made a successful progression from the Vancouver Golf Tour to the Web.com Tour and onto the PGA TOUR by the 2014-2015 season.

While his first two seasons on the PGA TOUR have been respectable, the University of Louisville alum has elevated his game to another level this year.

“My observation is he is much more patient and composed than in past years.  That comes from maturity and from having a good team around him.  And he’s putting incredibly well which can’t hurt,” noted Canadian men’s national team head coach, Derek Ingram.

“It takes so much longer on the men’s side on average.  It is just so deep and difficult.  29 is not old; but probably closer to the norm,” Ingram added.

It was in January at the CareerBuilder Challenge when the former Canadian national team member garnered the attention of the entire golfing world by carding a 59 – only the ninth sub-60 round in PGA TOUR history.

In a sport where so much is played between the ears, the sub-60 round undoubtedly provided the talented 5 foot 9 inch Canadian golfer with a higher level of self-belief and confidence which translated nicely to his first career PGA win at the Valspar Championship.

After claiming the title last month and over US$1.13 million for his efforts, Hadwin spoke candidly about his journey as well as the dedication and patience required along the way.

“I can’t say that I’ve been through a lot, but I’ve worked my butt off to get here,” pointed out Hadwin, who married his longtime girlfriend, Jessica, and bought a house within three weeks of his first PGA victory.

“I’ve slowly improved each and every year. I’ve won at every TOUR level that I’ve been on – and now I can call myself a PGA TOUR winner.”

On a recent Golf Canada conference call, Hadwin also spoke about what has contributed to his breakthrough win in 2017.

“What’s made me successful this year is that I stay aggressive, but I’m conservatively aggressive.  I think I’ve done a great job especially on par fives this year,” he said.

Given his outstanding start to 2017, perhaps finishing in a tie for 36th spot was not the result he was hoping for in his recent Masters debut.

Still, as the only Canadian to play into the weekend at Augusta National, there were plenty of reasons for Hadwin to be optimistic – including a 2 under par final round where he posted seven birdies.

Besides striving for the opportunity to showcase his “A” game at the other majors this year, the former national team member also has his sights set on securing a spot on the International Team for the Presidents Cup.

“I think it’s kind of firmly planted in there as a goal for the rest of the year.  I have September 4th marked on my calendar – that’s the last day to qualify. I want to make sure that I’m in the top 10… I don’t want to rely on a captain’s pick,” Hadwin pointed out.

“It would be the icing on the cake of a great year.  If I can stay inside the top ten, if not move up further, it would be a tremendous honour to represent Canada on such an international stage,” he added.

With six Canadians competing on the PGA TOUR and many talented prospects in the pipeline, Hadwin acknowledges that Canadian golf fans have plenty of reason to be optimistic.

“We’ve got guys playing well on the Web.com Tour and are ready to take that next step; and guys in behind that are moving up in to the Web.com Tour… I think Canadian golf is in great hands and I think it’s just going to continue to get better,” noted Hadwin.

Ingram acknowledges the achievements of 2003 Masters champion Mike Weir combined with the recent success of the five full-time Canadians on the PGA TOUR does a lot to inspire the younger golfers in the pipeline.

“Especially when guys like Mac (Hughes), Nick (Taylor) and Adam – who were all national team athletes – break through, it has deepened the belief in others that are up and coming,” noted the head coach of the Canadian men’s national squad.

Specifically on Hadwin’s stellar start to 2017, Ingram says it just serves as a simple reminder that with a little bit of patience, hard work does indeed pay off.

“Adam has really matured and grown as a person and player and his hard work and dedication over the years has paid off,” he said.

“Lots of the guys on the national team know Adam and like him.  They love seeing another Canuck play great; and more and more players are starting to realize that they can also do it.”