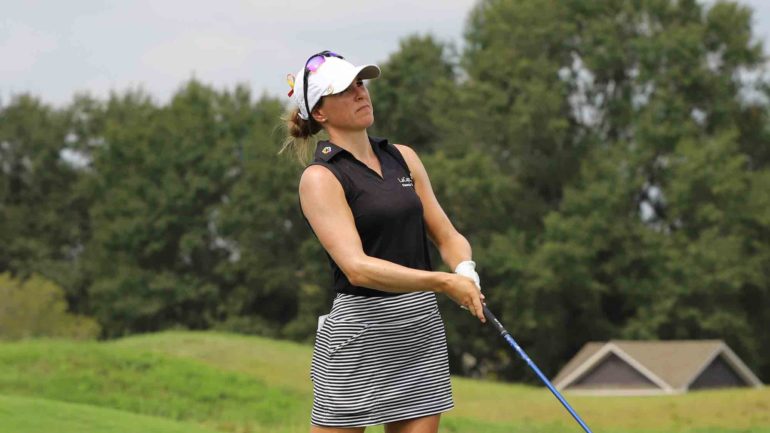 PRATTVILLE, Ala. — Entering the final round of the second annual Guardian Championship, Kendall Dye (Edmond, Oklahoma) trailed by two shots, but a 6-under par 66 performance this afternoon erased that deficit and helped claim her fourth career Symetra Tour title.

The University of Oklahoma alumna concluded the 19th event of the Symetra Tour season at 16-under par overall to raise the trophy, one shot ahead of Ruixin Liu (Dalian, China) and Min Seo Kwak (Seoul, Republic of Korea).

“I never really thought that I would get four professional victories out here, but I am so grateful,” said Dye, who recorded seven birdies and only one bogey today. “There was a lot of great competition and I thought if I gave myself a lot of good opportunities, make a few more putts than the last few days, then I could shoot something low. I’m thankful we got it done.”

In a week that shook the golf world with the tragic loss of Celia Barquin Arozamena (Puente San Miguel, Spain) last Monday, Dye joined the 120-player field in wearing Iowa State University hats donated by New Era and memorial ribbons throughout tournament play. During the trophy presentation, the first thing Dye talked about was dedicating the win to Barquin Arozamena.

“It was a very important week for all of us across the sport, especially in the women’s game,” Dye said. “I wanted to be the person to win this week in honor of Celia. We are going to carry on her legacy and play our hearts out for her each and every day. This is for her and her family.”

Meanwhile, the occasion etches Dye into the history books as the first two-time winner on the Symetra Tour in 2018. Up to this point, there had been 18 different champions for the season, but Dye becomes the first to step into the winner’s circle multiple times.

“I don’t set a ton of goals, but when I was told that no one had a repeat victory this year, I wanted to be that person to do it,” said Dye, who also won the Fuccillo Kia Classic of NY in late July. “I was late getting out here since I spent most of the year on the LPGA Tour, so it’s important to get my full membership for next year. I was really excited to play this week and if you can wake and still be excited late in the fourth quarter of the season like this, that’s a good thing.”

The result launches Dye from No. 23 to No. 7 in the Volvik Race for the Card. With two events remaining, the battle for the top-10 to earn full LPGA membership for 2019 still faces its biggest tests yet.

“It’s kind of like today, you can’t play prevent defense out here, you have to go and be hungry to win,” Dye said. “I don’t look at the money list because I’m not that smart to add it all up, I just come out here and play golf, get the ball in the hole. My experience will hopefully pay off. I’m really excited for the finish.”

Canadian Anne-Catherine Tanguay of Quebec City finished in a tie for 5th at 12 under par after an even-par 72 on Sunday. The Team Canada Young Pro Squad member held the 36-hole lead after setting a personal record through two rounds, but couldn’t keep it rolling into the finale.